Using StarMine models, Thomson Reuters senior analyst John Kozey has come up with 28 businesses that share similar characteristics to those that were purchased by Warren Buffett in the past. In previous articles, I have talked about several stocks on the list, including Mosaic Co (NYSE:MOS), Johnson Controls, Inc. (NYSE:JCI), SYSCO Corporation (NYSE:SYY), Archer Daniels Midland Company (NYSE:ADM), The Coca-Cola Company (NYSE:KO) and The Hershey Company (NYSE:HSY). In this article, I will dig deeper into another business in the list, Parker-Hannifin Corporation (NYSE:PH) , to see whether or not investors should initiate a long position in this stock now.

Parker-Hannifin Corporation (NYSE:PH), incorporated in 1938, is considered a global leading manufacturer of motion and control technologies and systems, such as electromechanical controls and fluid power systems, in around 47 countries, operating in three main segments: Industrial, Aerospace, and Climate & Industrial Controls. The company has a wide, diverse customer base of about 465,000 customers, and no single customer represented more than 3% of the company’s total sales.

The majority of its revenue, around $10 billion or 76.6% of total revenue, was generated from the Industrial segment. The Aerospace segment ranked second, with $2.1 billion in 2012 revenue, while the Climate & Industrial Controls segment contributed nearly $970 million in revenue. The Aerospace segment seems to be the most profitable segment, with the highest operating margin of 13.8%, while the operating margin of the Industrial segment and the Climate & Industrial Controls segment were 8.95% and 8.7%, respectively.

Parker-Hannifin Corporation (NYSE:PH) has demonstrated a great operating performance record in the past 10 years, with consistent growth in revenue, EPS, cash flow, and dividends. 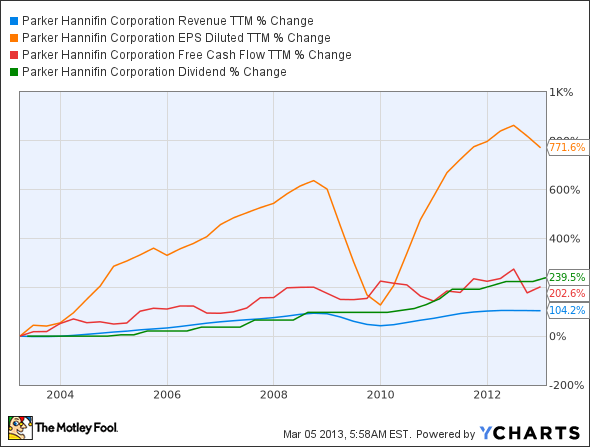 What interests me is that Parker-Hannifin Corporation (NYSE:PH) has strong balance sheet. As of December 2012, it had $5.33 billion in total stockholders’ equity, $500 million in cash, nearly $2 billion in debt, and $1.7 billion in pension and other benefits. In the past five years, the company has been quite active in buying back its stock. Thus, the treasury stock amount has increased from $863 million in 2008 to $2.25 billion in 2012.