Peyton Manning got his on revenge on Thursday night. The Denver Broncos handily crushed the Baltimore Ravens, winning 49 to 27, and leaving the defending Super Bowl champs with an unfortunate loss to start their season.

There was certainly tension in the air when the two teams took the field. The Broncos’ overtime loss last year in the AFC divisional round to the Ravens was as close as NFL games get, and it was voted the NFL game of the year.

Manning’s performance on Thursday was stellar. With seven touchdown passes, compiling 462 yards without an interception, the iconic quarterback set some new NFL records to add to his resume. Though the win was great for Colorado, the Broncos, and Manning, a few CEOs with economic interests in Manning probably jumped to their feet, too — especially Papa John’s Int’l, Inc. (NASDAQ:PZZA)‘s founder and CEO John Schnatter.

Mr. Manning and his favorite pizza company
Papa John’s Int’l, Inc. (NASDAQ:PZZA) has a close relationship with the NFL. Not only is it the league’s Official Pizza Sponsor, but the company is also running a free pizza deal again this year for NFL fans.

When it comes to Peyton Manning, however, the NFL-Papa John’s relationship gets even cozier.

But 2012 was only the beginning. The love affair between Manning and Papa John’s continues to flourish. According to a press release from Papa John’s Int’l, Inc. (NASDAQ:PZZA), Manning’s recent commercial with the company is just a first of a series of ads featuring the quarterback that will run throughout the 2013 season. You can bet Schnatter was watching the game closely on Thursday night.

“There’s no better spokesman out there than Peyton to help us get the word out about Papa John’s,” said Schnatter. “He’s one of the most admired and respected athletes who is very engaging with a great sense of humor, which you’ll see in these commercials.”

To be fair, Papa John’s is also the Official Pizza of the Baltimore Ravens (and a handful of other teams), but given the pizza company’s cozy affiliation with Manning, there’s a high likelihood that Schnatter was cheering for the Broncos.

Over the past two years, Papa John’s Int’l, Inc. (NASDAQ:PZZA) stock has been on a tear, rewarding investors with a handsome 130% gain. 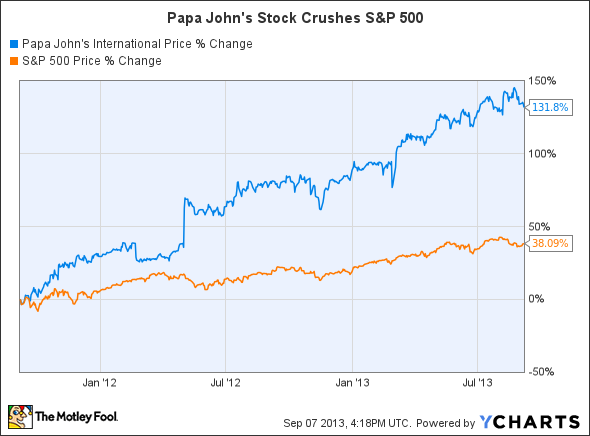