I have to admit, that since the likes of Panera Bread Co (NASDAQ:PNRA) and Chipotle Mexican Grill, Inc. (NYSE:CMG), I rarely spend time at the fast-food joints. Even though both of these stocks are up over 200% over the last five years… 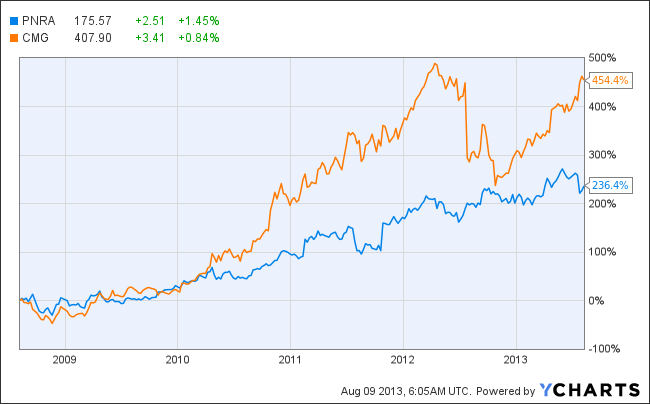 As the demand for fresh food continues to grow, so too should the revenue of the major fast-casual restaurants that are focused on fresh and healthy foods. Market research firm NPD notes that the restaurants in the fast food and casual dining segments have reported either a decline or growth of 2% in customer traffic over the past four years, while the fast-casual segment has seen 4% to 11% growth.

Chipotle Mexican Grill, Inc. (NYSE:CMG) has grown into one of the most recognized names in Mexican food. One of its big selling points is its motto — Food With Integrity — which includes naturally raised pork, chicken and beef, and organic produce.

One of the biggest things for Chipotle is the possibility of international expansion, namely in Europe. The company already owns seven restaurants on the continent. Also, Chipotle is entering the markets in the U.S. with its ShopHouse restaurants.

I don’t see this as plausible, and feel that the two chains are fundamentally different. I can only imagine the last time that Einhorn actually visited a Taco Bell. Yum! Brands, Inc. (NYSE:YUM) has its hands full with China and Chipotle is likely one of its least concerns as of now.

In July, Yum! posted EPS of $0.56, compared to $0.67 for the same period last year, as revenue fell 8% and same-store sales declined 20% in China. Weaker same-store sales in China should also have an impact on margins. The problem? Remaining overhang and health concerns related to the bird flu and contaminated poultry supplies in China.