Insider Monkey finished processing more than 700 13F filings made by hedge funds and prominent investors. These filings show these funds’ portfolio positions as of September 30th. What do these smart investors think about Palatin Technologies, Inc. (NYSEAMEX:PTN)?

Palatin Technologies, Inc. (NYSEAMEX:PTN) shares haven’t seen a lot of action during the third quarter. Overall, hedge fund sentiment was unchanged. The stock was in 6 hedge funds’ portfolios at the end of the third quarter of 2018. The level and the change in hedge fund popularity aren’t the only variables you need to analyze to decipher hedge funds’ perspectives. A stock may witness a boost in popularity but it may still be less popular than similarly priced stocks. That’s why at the end of this article we will examine companies such as CARBO Ceramics Inc. (NYSE:CRR), First Business Financial Services Inc (NASDAQ:FBIZ), and New America High Income Fund Inc. (NYSE:HYB) to gather more data points.

What have hedge funds been doing with Palatin Technologies, Inc. (NYSEAMEX:PTN)? 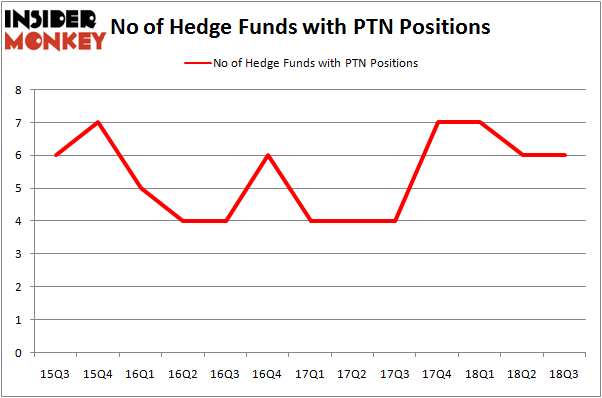 The largest stake in Palatin Technologies, Inc. (NYSEAMEX:PTN) was held by Arrowstreet Capital, which reported holding $1.4 million worth of stock at the end of September. It was followed by Alyeska Investment Group with a $0.5 million position. Other investors bullish on the company included Citadel Investment Group, Two Sigma Advisors, and Renaissance Technologies.

We view hedge fund activity in the stock unfavorable, but in this case there was only a single hedge fund selling its entire position: Gotham Asset Management. One hedge fund selling its entire position doesn’t always imply a bearish intent. Theoretically a hedge fund may decide to sell a promising position in order to invest the proceeds in a more promising idea. However, we don’t think this is the case in this case because only one of the 800+ hedge funds tracked by Insider Monkey identified as a viable investment and initiated a position in the stock (that fund was HighVista Strategies).

As you can see these stocks had an average of 4.5 hedge funds with bullish positions and the average amount invested in these stocks was $7 million. That figure was $2 million in PTN’s case. CARBO Ceramics Inc. (NYSE:CRR) is the most popular stock in this table. On the other hand New America High Income Fund Inc. (NYSE:HYB) is the least popular one with only 1 bullish hedge fund positions. Palatin Technologies, Inc. (NYSEAMEX:PTN) is not the most popular stock in this group but hedge fund interest is still above average. This is a slightly positive signal but we’d rather spend our time researching stocks that hedge funds are piling on. In this regard CRR might be a better candidate to consider a long position.

Should You Buy The Hanover Insurance Group, Inc. (THG)?
Monthly Newsletter Strategy
Download a free copy of our newsletter and see the details inside!
Hedge Fund Resource Center
Related News
This Metric Says You Are Smart to Buy Palatin Technologies, Inc. (PTN) 11 Countries With The Worst Modern Music In The World The Top 5 Robo Advisor Apps of 2018 Five Reasons You Need a Day-Trading Mentor
Billionaire Hedge Funds