O’Reilly Automotive Inc (ORLY), Advance Auto Parts, Inc. (AAP), AutoZone, Inc. (AZO): How I Used Peter Lynch to Make Money, and How You Can, Too

Today, I’m able to pat myself on the back and say “job well done”: I played the automotive industry and the market like a fiddle.

It all started years ago in the midst of the nastiest recession our nation has faced. Years ago, where my story begins, I read Peter Lynch’s book One Up On Wall Street, from which I picked up some great — yet simple — investing knowledge. Here’s the good news for investors: What I did is one of many strategies that can and will work again.

Rather than pull my money out at the wrong time, as so many people did, I invested in specific trend-bucking, low-beta stocks — O’Reilly Automotive Inc (NASDAQ:ORLY), Advance Auto Parts, Inc. (NYSE:AAP), and AutoZone, Inc. (NYSE:AZO). I did so while following Lynch’s advice to “invest in what you know.” To allow me to tell my story, let me briefly explain what the beta number is and how it works. Then I’ll tell you why I picked those stocks and explain how you can do it next time.

Beta number
In case someone out there can learn from me today, here’s how a stock’s beta number works. You can find the number listed on any ticker profile page.

If the number is less than 0, the stock generally moves in the opposite direction as the market index — gold, for example.

If the number is equal to 0, the stock movement is uncorrelated to the market.

If the number is greater than 0, but less than 1, the stock’s movement is generally the same direction as the market index but to a lesser degree.

If the number is equal to 1, its movement is generally the same as the market and to the same degree.

If the number is greater than 1, it moves in the same direction but to a higher degree.

While I never recommend trying to time the market — ever — you can help protect your portfolio by moving some assets into low-beta stocks during downturns. When things begin to improve, move some assets into higher-beta stocks. This is where my story begins.

The Great Recession
When the financial crisis occurred and the stock market began to tank as we entered into a severe recession, I searched for low-beta stocks that I knew and was confident in. I began my marketing career in the automotive industry and knew it thoroughly. I knew that during a recession, consumers put off large vehicle purchases and repairs — opting to do the repairs themselves.

This consumer mind-set to save a buck on an oil change and other small repairs was a boon to automotive retailers such as O’Reilly Automotive Inc (NASDAQ:ORLY), Advance Auto Parts, Inc. (NYSE:AAP), and AutoZone, Inc. (NYSE:AZO). Their beta numbers are low at 0.40, 0.49, 0.20, respectively, and I pulled the trigger to move some of my assets into those three stocks. During the recession and following months, store traffic increased and company profits surged — which made these stocks rare winners at the time. Switching back to high beta
If that one move was all I had done, it would have been a great move — and those three are still doing well. Since I still follow and understand the automotive industry for a living, I saw the rebound potential that Ford Motor Company (NYSE:F) represented last year. Ford Motor Company (NYSE:F) has a much higher beta number at 1.56, and I finally had enough confidence in our economy’s momentum to invest in high-beta stocks. During one of Ford’s famous “summer swoons,” I took advantage of what I thought was an undervalued stock and pushed some of my assets into it. 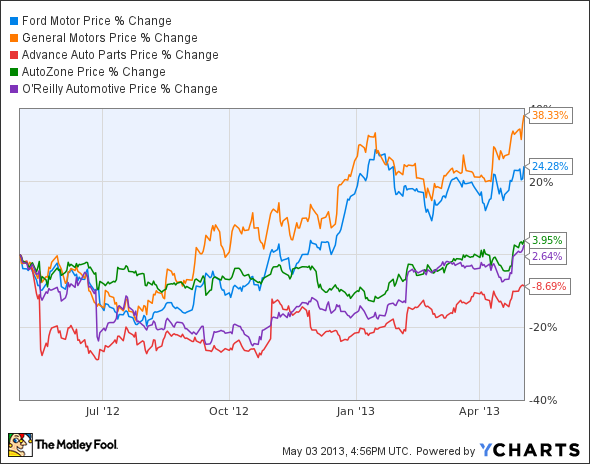