If you thought a key ingredient used by The Coca-Cola Company (NYSE:KO) was obtained only from the coca plant, you may have been barking up the wrong tree.

The Atlanta-based company is working out details with growers in Florida and Brazil to purchase oranges from them. Yes, oranges. It will spend about $2 billion in Florida alone over the next 20 years.

Many of the drinks it supplies contain oranges. The Coca-Cola Company (NYSE:KO) now buys about 33% of the Florida orange crop. That number will probably go up as the company tries to meet the rising demand for its Del Valle, Simply Orange and Minute Maid brands, each worth at least $1 billion. Indeed, the company has reported a 9% increase in 2013 first-quarter juice sales.

The growth spurt might be coming at a good time. Sales of the company’s best known brand, Coke, and other cola-flavored soft drinks might be affected in the long run, not by general economic trends, but by increasing pressure from consumer watch groups, health advocates and politicians like NYC Mayor Michael Bloomberg as part of an effort to reduce obesity rates.

In a controversial move Mr. Bloomberg recently banned “sugary” soft drinks larger than 16 oz. from the Big Apple. The size limitation was later overturned by a judge.

The Coca-Cola Company (NYSE:KO) is not alone. The biggest buyer of Florida oranges is Tropicana, owned by their archrival PepsiCo, Inc (NYSE:PEP). Pepsi has deals in place with 12 different growers in the Sunshine State. In order to have a supply available year-round, it also buys from Brazil.

While Tropicana is still the number-one seller in the segment, it has been losing share. It now has 20% of the market, down from a peak of 22% in 2009. The Minute Maid brands have about a 14% share, up two percentage points over the same period.

According to many analysts, Pepsi seems to be paying less attention to its beverage business in order to grow its snack food segment. Has the strategy worked? Revenue, earnings, and the stock price are all up over the last five years. However, Pepsi’s performance has lagged that of The Coca-Cola Company (NYSE:KO), which has had gains of over 50% in each category over the same time period. 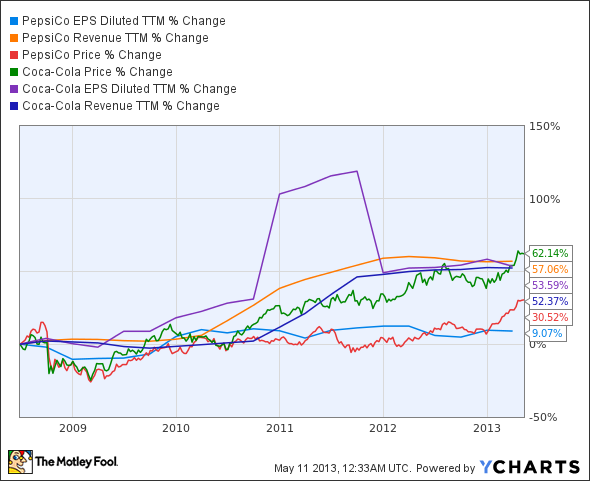 Another company that uses oranges in its juice drinks is Monster Beverage Corp (NASDAQ:MNST). There have been no reports of the company making any deals with growers in Florida or Brazil to increase the supply, however.

Monster Beverage Corp (NASDAQ:MNST), known for its “energy” drinks and decorated cans, is a relatively new company, having started operations under its current name in 2007. It has about a century to go to catch up to both The Coca-Cola Company (NYSE:KO) and PepsiCo, Inc (NYSE:PEP).

Another area where Monster needs to catch up to its rivals is in growth. While earnings and revenue have increased at a fairly robust rate over the last several years it still lags its competitors for the most part.