International Business Machines Corp. (NYSE:IBM) is having a rough year , producing a negative 6% return so far. The company had a wonderful come-back in the 90s thanks to its cost reductions and shift toward software and consulting, which led to amazing financial performance for a decade.  And since 2002, revenue, gross profit, and operating profit have compounded at annual rates of 3%, 6%, and 12%.

However, the current situation is totally different. International Business Machines Corp. (NYSE:IBM) may need a transformation and reengineering of its business. According to many IBM fans, that shouldn’t be a big problem because International Business Machines Corp. (NYSE:IBM) has been able to change several times in the past: this is just another time. Bears, on the other hand, keep reminding us that this time is different. What kind of future awaits IBM shareholders in the short and long run? 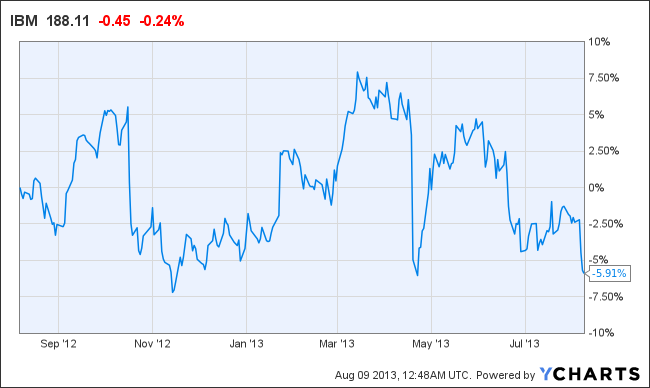 Is IBM’s end near?

In the first quarter of 2013, for the first time in 8 years International Business Machines Corp. (NYSE:IBM) missed earnings expectations: sales declined 5%, posing a strong risk to IBM’s long-term business, as two-thirds of its revenue base is recurring.

Full-year earnings guidance of $16.70 were just $0.07 below the consensus. But these $0.07  reflected long-term changes in the main markets IBM addresses: a contraction in global demand for IBM’s high-end systems & hardware, and growth limits in the private cloud computing segment. These long-term trends started hurting International Business Machines Corp. (NYSE:IBM)’s cash flow already in 2009 and the $0.07  should have been seen as the beginning of a series of disappointments and pain for shareholders.

Unfortunately, the second quarter results did not show the kind of substantive change that investors were looking forward to. International Business Machines Corp. (NYSE:IBM) did beat the consensus by a tiny margin.

That was just not enough.

Analysts had kept estimates low but their expectations were actually higher: they tacitly were expecting a major change in business focus, which did not seem to happen. As a result, institutions from Credit Suisse to UBS downgraded the stock. It’s simple to understand the downgrades: margins were down 3% from last year. The elephant is spending the same or more money, but making much less than before. Now, similar results coming from other companies in the software and services sector, like Oracle Corporation (NYSE:ORCL), show that the whole industry is in trouble. But to make matters worse, IBM still has 34% (hardware + System Z server sales) of its revenue coming from the commodity-like hardware segment, which is even riskier than the services segment, because of increasing competition from Intel Corporation (NASDAQ:INTC)’s cheap machines.

In “IBM: The End Is Near” investor Arne Alsin identified a massive paradigm shift as the root of all of IBM’s problems. The industry is moving to the public cloud: low-cost yet powerful computing architecture. IBM’s main products (e.g. System Z and private cloud solutions), on the other hand, depend on the old paradigm–the private cloud, a soon-to-be legacy business.

Oracle is the perfect example of a competitor in the software and services sector. Specifically, in the middleware market, competition between these two giants is fierce, with IBM owning roughly one third of the whole market.  Oracle Corporation (NYSE:ORCL) is also having a tough time trying to keep revenue growth alive. In the latest quarter, new software licenses and cloud subscriptions fell 2 percent to $2.3 billion.