Investors love stocks that consistently beat the Street without getting ahead of their fundamentals and risking a meltdown. The best stocks offer sustainable market-beating gains, with robust and improving financial metrics that support strong price growth. Does VMware, Inc. (NYSE:VMW) fit the bill? Let’s look at what its recent results tell us about its potential for future gains.

The graphs you’re about to see tell VMware, Inc. (NYSE:VMW)’s story, and we’ll be grading the quality of that story in several ways: 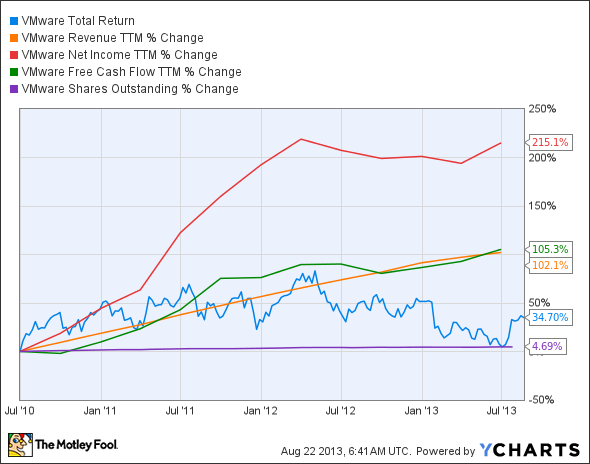 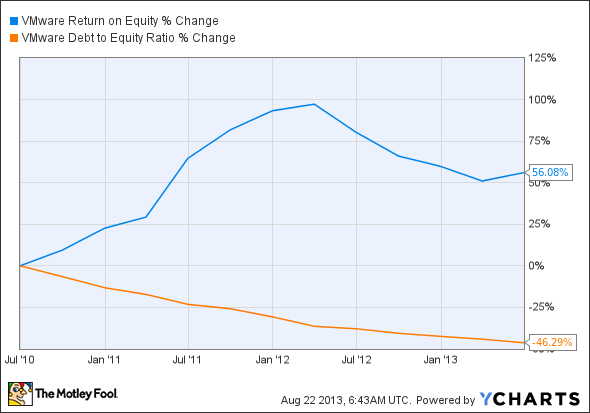 VMware, Inc. (NYSE:VMW) puts together an extremely strong performance, missing out on a perfect score only because net income has surpassed free cash flow during our tracked period. However, the raw numbers shows that VMware’s free cash flow has consistently been reported at levels more than double its net income over the past three years. That makes it an even more appealing value, as its price-to-free cash flow ratio is just under 20 at the moment. But does that mean VMware will keep outperforming in the future? Let’s dig a little deeper.

Shares of virtualization specialist VMware, Inc. (NYSE:VMW) soared as much as 17% after posting better-than-expected top- and bottom-line results in its second-quarter earnings report. The company has been identifying and tapping enormous opportunities in the cloud-based services segment, which ought to continue to boost its overall sales growth in the future. Fool contributor Dan Caplinger notes that VMware has agreed to work with Brocade Communications, which will enable both the companies to leverage “rapidly growing cloud-computing and Big Data trends.” This partnership could result in a potential price war with Oracle Corporation (NYSE:ORCL), as the larger company attempts to maintain its competitive position in the network storage business.

Last year, VMware rival NetApp launched a modified version of its operating system, ONTAP, which has already captured significant market share in the cloud-based data storage segment. NetApp can also undermine VMWare’s majority owner EMC Corporation (NYSE:EMC) if acquired by a bigger fish such as Oracle Corporation (NYSE:ORCL), as NetApp holds a competitive cloud-storage advantage due to its Big Data exposure in the IT industry. EMC has been expanding its presence in cloud and data analytics services, and has plans for a joint venture with VMware called Pivotal, which will operate as a separate publicly traded entity.

VMware recently divested itself of Zimbra, an enterprise email and collaboration service, to bring the focus back to its core operations. It’s hard to find fault with this decision in a world of freely available online productivity suites. VMWare has also authorized a $700 million share buyback plan to boost investor confidence, and this is expected to wrap up by the end of 2016.