I’m talking about Adobe’s cloud-based initiatives, which I believe will lift its stock price skyward – if it can stabilize its top and bottom growth after the transition. Let’s evaluate the company’s recent quarterly earnings and these growth initiatives to see if investors should take note.

Adobe by the numbers

For the first quarter of fiscal 2013, Adobe Systems Incorporated (NASDAQ:ADBE) earned 13 cents per share, or $65.1 million, a 65% drop from the 37 cents per share, or $185.2 million, it reported in the prior year quarter. Adjusting for one-time charges, earnings dropped year-on-year from 57 cents to 35 cents per share, but still topped the Thomson Reuters consensus estimate of 31 cents.

Adobe’s weakened earnings were caused by a long-term overhaul of its business model, where it is transforming its packaged software business into a cloud-based one. This led to its quarterly decline in operating margins, which slid from 27.6% to 9.7%. Expenses rose 16% as packaged product sales slid 16%. Adobe noted that these quarterly declines were caused by cloud-based subscriptions rising ahead of expectations. 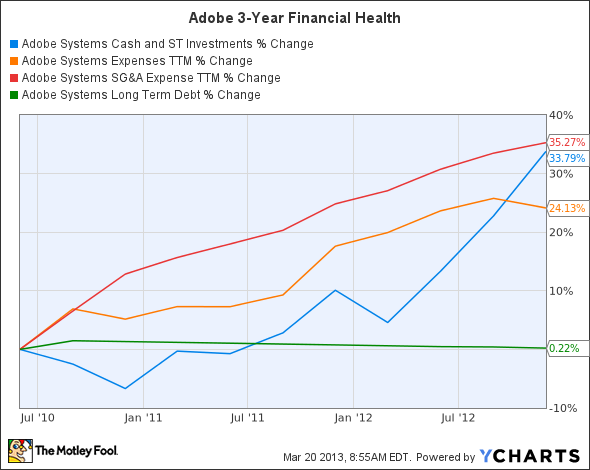 Rising expenses have been a continuous trend over the past three years. Luckily, long-term debt levels remain nearly unchanged, and its cash hoard has grown substantially to $3.5 billion – but still a modest amount by tech standards.

In the past, Adobe Systems Incorporated (NASDAQ:ADBE) sold its packaged software individually, and users would purchase newer versions as they were released. Customers would pay $700 to $2,500 for software from its Creative Suite – which includes Photoshop, Illustrator, Dreamweaver, Flash Builder and Dreamweaver, among others.

Under Adobe’s new model, known as the Creative Cloud, its focus has shifted towards a cloud-based online subscription model – which offers its Creative Suite software ‘as a service’ on the Internet. Projects on the cloud can be automatically saved online and accessed from any computer, while updates can be installed on the server side, without user intervention. The cloud-based service initially costs less than its packaged counterpart, with subscription fees between $30 to $50 monthly for full access to Adobe’s Creative Suite. As a result, Adobe is expected to take short-term losses to build long-term gains.

During the quarter, Adobe added 12,500 subscribers weekly – a 25% increase from the prior year quarter. The company has successfully attracted users with its free trial period, which allows users to test its tools before converting to full subscriptions. The strategy has been highly effective – during the quarter, Adobe turned 153,000 of those trial users to paid ones, well ahead of the analyst projection of 120,000. In addition, 90% of those showed their long-term commitment by selecting annual contracts. To date, Adobe has converted 479,000 trial users into paid subscribers.

Adobe’s target is to have 1.25 million users in the subscription-based Creative Cloud by the end of fiscal 2013, and up to four million by the end of 2015.

CFO Mark Garrett noted that revenue from the Creative Cloud will grow 15% annually after the transition to subscriptions stabilizes.