A whopping number of 13F filings filed with U.S. Securities and Exchange Commission has been processed by Insider Monkey so that individual investors can look at the overall hedge fund sentiment towards the stocks included in their watchlists. These freshly-submitted public filings disclose money managers’ equity positions as of the end of the three-month period that ended September 30, so let’s proceed with the discussion of the hedge fund sentiment on Open Text Corporation (NASDAQ:OTEX).

Open Text Corporation (NASDAQ:OTEX) was in 19 hedge funds’ portfolios at the end of September. OTEX has experienced an increase in activity from the world’s largest hedge funds in recent months. There were 13 hedge funds in our database with OTEX positions at the end of the previous quarter. Our calculations also showed that otex isn’t among the 30 most popular stocks among hedge funds.

Heading into the fourth quarter of 2018, a total of 19 of the hedge funds tracked by Insider Monkey were long this stock, a change of 46% from the previous quarter. Below, you can check out the change in hedge fund sentiment towards OTEX over the last 13 quarters. With hedge funds’ capital changing hands, there exists an “upper tier” of noteworthy hedge fund managers who were adding to their holdings significantly (or already accumulated large positions). 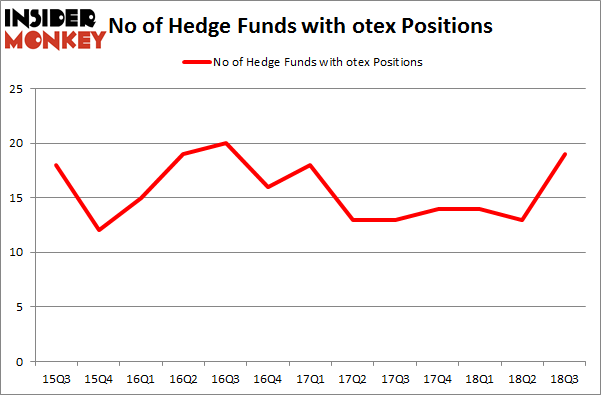 The largest stake in Open Text Corporation (NASDAQ:OTEX) was held by Blue Harbour Group, which reported holding $374.9 million worth of stock at the end of September. It was followed by Praesidium Investment Management Company with a $157.4 million position. Other investors bullish on the company included Arrowstreet Capital, Sunriver Management, and Two Sigma Advisors.

As one would reasonably expect, some big names were leading the bulls’ herd. Sunriver Management, managed by Will Cook, created the most outsized position in Open Text Corporation (NASDAQ:OTEX). Sunriver Management had $22.1 million invested in the company at the end of the quarter. John Overdeck and David Siegel’s Two Sigma Advisors also made a $13.5 million investment in the stock during the quarter. The other funds with brand new OTEX positions are Jim Simons’s Renaissance Technologies, Jeffrey Talpins’s Element Capital Management, and David Costen Haley’s HBK Investments.

As you can see these stocks had an average of 21.5 hedge funds with bullish positions and the average amount invested in these stocks was $1.29 billion. That figure was $759 million in OTEX’s case. Jazz Pharmaceuticals Public Limited Company (NASDAQ:JAZZ) is the most popular stock in this table. On the other hand Duke Realty Corporation (NYSE:DRE) is the least popular one with only 16 bullish hedge fund positions. Open Text Corporation (NASDAQ:OTEX) is not the least popular stock in this group but hedge fund interest is still below average. This is a slightly negative signal and we’d rather spend our time researching stocks that hedge funds are piling on. In this regard JAZZ might be a better candidate to consider a long position.