Hedge funds and large money managers usually invest with a focus on the long-term horizon and, therefore, short-lived dips on the charts, usually don’t make them change their opinion towards a company. This time it may be different. During the first 6 weeks of the fourth quarter we observed increased volatility and small-cap stocks underperformed the market. Hedge fund investor letters indicated that they are cutting their overall exposure, closing out some position and doubling down on others. Let’s take a look at the hedge fund sentiment towards OneMain Holdings Inc (NYSE:OMF) to find out whether it was one of their high conviction long-term ideas.

Is OneMain Holdings Inc (NYSE:OMF) a healthy stock for your portfolio? Investors who are in the know are getting more bullish. The number of bullish hedge fund bets went up by 4 in recent months. Our calculations also showed that omf isn’t among the 30 most popular stocks among hedge funds. OMF was in 26 hedge funds’ portfolios at the end of the third quarter of 2018. There were 22 hedge funds in our database with OMF positions at the end of the previous quarter.

What does the smart money think about OneMain Holdings Inc (NYSE:OMF)?

At Q3’s end, a total of 26 of the hedge funds tracked by Insider Monkey held long positions in this stock, a change of 18% from the previous quarter. The graph below displays the number of hedge funds with bullish position in OMF over the last 13 quarters. With hedgies’ sentiment swirling, there exists a few notable hedge fund managers who were increasing their holdings significantly (or already accumulated large positions). 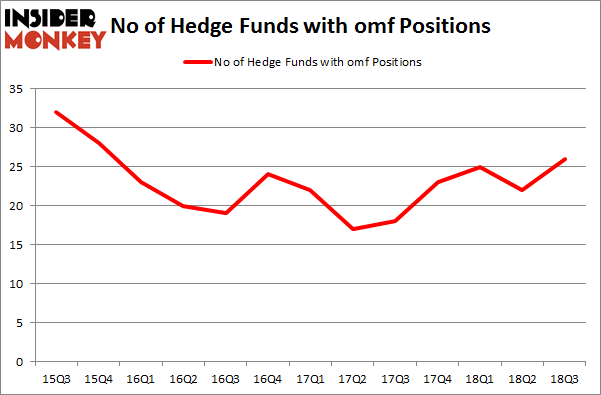 The largest stake in OneMain Holdings Inc (NYSE:OMF) was held by Basswood Capital, which reported holding $87.3 million worth of stock at the end of September. It was followed by Alyeska Investment Group with a $38 million position. Other investors bullish on the company included Toscafund Asset Management, Millennium Management, and Citadel Investment Group.

As industrywide interest jumped, key hedge funds were leading the bulls’ herd. Toscafund Asset Management, managed by Martin Hughes, established the biggest position in OneMain Holdings Inc (NYSE:OMF). Toscafund Asset Management had $37.5 million invested in the company at the end of the quarter. Gregg Moskowitz’s Interval Partners also made a $6 million investment in the stock during the quarter. The other funds with new positions in the stock are Jeffrey Talpins’s Element Capital Management, David Costen Haley’s HBK Investments, and Matthew Hulsizer’s PEAK6 Capital Management.

As you can see these stocks had an average of 22.25 hedge funds with bullish positions and the average amount invested in these stocks was $349 million. That figure was $319 million in OMF’s case. Oasis Petroleum Inc. (NYSE:OAS) is the most popular stock in this table. On the other hand Trex Company, Inc. (NYSE:TREX) is the least popular one with only 17 bullish hedge fund positions. OneMain Holdings Inc (NYSE:OMF) is not the most popular stock in this group but hedge fund interest is still above average. This is a slightly positive signal but we’d rather spend our time researching stocks that hedge funds are piling on. In this regard OAS might be a better candidate to consider a long position.