One Multi Level Marketer Is On A Tear: Herbalife Ltd. (HLF)

Despite the turmoil surrounding multi-level marketing companies, with billionaire Bill Ackman launching an offensive against Herbalife Ltd. (NYSE:HLF), Avon Products, Inc. (NYSE:AVP) saw its stock up 20% after its earnings announcement. Avon investors took the numbers as “stabilizing” and a sign that restructuring might be taking hold for the company, but is it too rich for investors to buy in now? I wouldn’t go that far (read more about the earnings over reaction).

Multi-level marketing companies have been under pressure of late thanks to Ackman’s Herbalife accusations. With Herbalife in the spotlight, new speculation has arisen concerning Nu Skin Enterprises, Inc. (NYSE:NUS). The accusations of Nu Skin Enterprises, Inc. (NYSE:NUS) as a pyramid scheme goes back to the early nineties. However, fellow MLM company Avon has not seen as much pressure as Herbalife and Nu Skin. Both are still down over 8% since Ackman’s attack on Herbalife–Avon, meanwhile, is up over 40%. 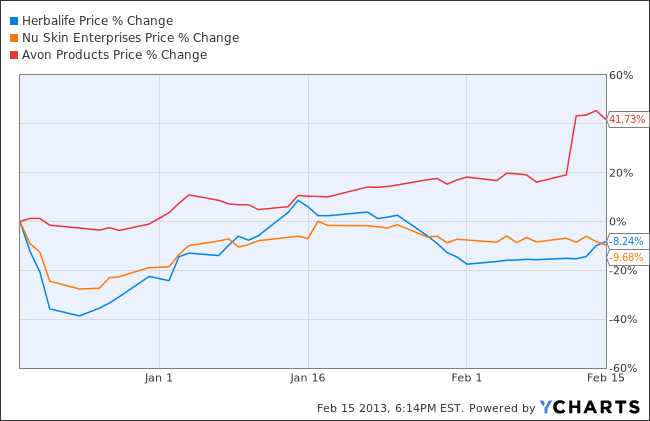 Avon managed to report EPS of $0.37 per share versus consensus of $0.27. This is well above the flat earnings per share the company posted for the same quarter a year ago. For its top market, Brazil, revenue rose 10%, but for its fastest growing market, Asia, revenue rose a mere 3%.

Fellow beauty products company Nu Skin has also managed to post solid results for its latest quarter, posting EPS of $0.97, compared to $0.76 for the same quarter last year, and above consensus of $0.96. The company also upped its revenue guidance by $50 million to between $2.3 billion and $2.35 billion.

The unfavorable product mix for both Nu Skin and Avon should put pressure on the companies going forward. Also, weak discretionary spending will pressure the stocks. Avon’s management has outlined unexciting growth expectations for the company, with revenue expected to come in at mid-single digit growth, and a low double-digit operating margin over the next three years. The company also cut its quarterly dividend by $0.06 per share to $0.23 per share, dropping its dividend payment and lowering its yield from over 4% to a mere 1.15%.
Avon has been seeing pressures from various products and product lines, where competition is fierce in the niche beauty products market. Pressures include those from Estee Lauder Companies Inc (NYSE:EL) and Revlon Inc (NYSE:REV), whose products are sold through direct-sales companies, as well as internet and mass-market retail channels. Both of these companies have posted better than expected earnings results. Estee Lauder posted last quarter earnings of $1.16 per share, which were up 15% from the prior-year quarter, and ahead of the management guidance range of $0.97-$1.03. Estee also owns brands that includes MAC, Bobbi Brown and Clinique.
Revlon’s last quarter earnings were up 28% from the same quarter last year. Revlon’s brands includes Almay, Pure Ice, Charlie and Mitchum. Driving Revlon has been sales growth of 14% for the U.S. segment and 15% for Latin America. Revlon is up over 40% year to date already, whereas Avon is up almost 30% over the same time period.
Share Tweet Email
Page 1 of 2
Next >>
See All