The elite funds run by legendary investors such as Dan Loeb and David Tepper make hundreds of millions of dollars for themselves and their investors by spending enormous resources doing research on small cap stocks that big investment banks don’t follow. Because of their pay structures, they have strong incentive to do the research necessary to beat the market. That’s why we pay close attention to what they think in small cap stocks. In this article, we take a closer look at Ollie’s Bargain Outlet Holdings Inc (NASDAQ:OLLI) from the perspective of those elite funds.

Ollie’s Bargain Outlet Holdings Inc (NASDAQ:OLLI) has experienced an increase in hedge fund interest in recent months. OLLI was in 17 hedge funds’ portfolios at the end of the third quarter of 2018. There were 15 hedge funds in our database with OLLI positions at the end of the previous quarter. Our calculations also showed that OLLI isn’t among the 30 most popular stocks among hedge funds. 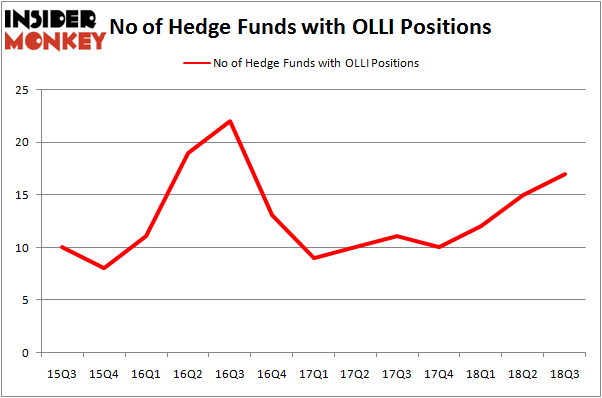 Among these funds, Balyasny Asset Management held the most valuable stake in Ollie’s Bargain Outlet Holdings Inc (NASDAQ:OLLI), which was worth $38.9 million at the end of the third quarter. On the second spot was Millennium Management which amassed $26.2 million worth of shares. Moreover, Adage Capital Management, Marshall Wace LLP, and PDT Partners were also bullish on Ollie’s Bargain Outlet Holdings Inc (NASDAQ:OLLI), allocating a large percentage of their portfolios to this stock.

As industrywide interest jumped, some big names were leading the bulls’ herd. Millennium Management, managed by Israel Englander, assembled the largest position in Ollie’s Bargain Outlet Holdings Inc (NASDAQ:OLLI). Millennium Management had $26.2 million invested in the company at the end of the quarter. Andrew Feldstein and Stephen Siderow’s Blue Mountain Capital also made a $9.3 million investment in the stock during the quarter. The other funds with brand new OLLI positions are Jim Simons’s Renaissance Technologies, Steve Cohen’s Point72 Asset Management, and John Overdeck and David Siegel’s Two Sigma Advisors.

As you can see these stocks had an average of 21.75 hedge funds with bullish positions and the average amount invested in these stocks was $490 million. That figure was $146 million in OLLI’s case. Owens Corning (NYSE:OC) is the most popular stock in this table. On the other hand CPFL Energia S.A. (NYSE:CPL) is the least popular one with only 2 bullish hedge fund positions. Ollie’s Bargain Outlet Holdings Inc (NASDAQ:OLLI) is not the least popular stock in this group but hedge fund interest is still below average. This is a slightly negative signal and we’d rather spend our time researching stocks that hedge funds are piling on. In this regard OC might be a better candidate to consider a long position.