Office Depot Inc (NYSE:ODP) and OfficeMax Inc (NYSE:OMX), the second and third largest office supply retailers in the United States after Staples, Inc. (NASDAQ:SPLS), recently joined forces by announcing an all-stock, $1.2 billion merger — pooling their resources to curb a six-year decline caused by the rise of e-commerce and wholesale retailers. The merger is a sign of the times, as big box retailers, which suffer from the high costs of maintaining large brick and mortar businesses, struggle to stay relevant in today’s market. So the question is simple — does combining two losers make a winner, or just a bigger, fatter loser?

A tale of two losers

These bleak earnings are just a continuation of a downward trend that started during the recession. Let’s look at how the three main big box office supply retailers have fared against Amazon.com, Inc. (NASDAQ:AMZN), Wal-Mart Stores, Inc. (NYSE:WMT) and Costco Wholesale Corporation (NASDAQ:COST), which respectively represent the industry’s three largest threats — e-commerce, discount and wholesale. 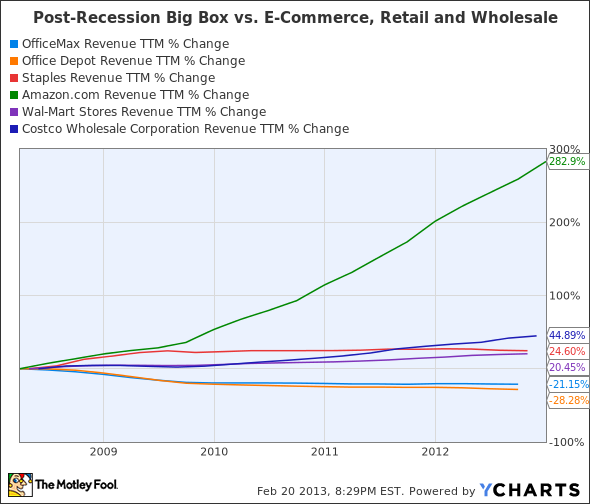 Although Staples appears to have escaped the dire fate of OfficeMax and Office Depot, its revenue is still steadily declining — just not as quickly.

Increased Internet penetration over the past decade and the rising adoption of smartphones has turned many big box retailers into showrooms. Customers visit their stores to test out products before comparing prices online, often opting to purchase them from a cheaper e-commerce site, such as Amazon or eBay Inc (NASDAQ:EBAY), instead.

Software such as barcode scanners have also simplified this process considerably, offering instant price comparisons. Therefore, big box retailers have completely lost pricing power, and are forced to absorb extra overhead costs such as real estate, inventory and utilities, which can no longer be passed on to the customer.

While e-commerce sites are squeezing OfficeMax and Office Depot on one side, wholesale retailers such as Costco and Wal-Mart’s Sam’s Club crush them on the other. Costco and Sam’s Club are able to sell office products at steep discounts and in bulk, which is much more appealing for cost-conscious businesses. They are also able to sell at paper-thin margins, undercutting both OfficeMax and Office Depot, because much of their revenue is generated from paid memberships. Even without a Sam’s Club membership, Wal-Mart’s namesake stores are often able to offer lower prices on office supplies, by simply taking losses in certain departments (the loss leader strategy) to drive up sales volume.

Therefore, OfficeMax and Office Depot are being smashed in both the individual consumer and business markets — which leaves it with very few options. The office supply retailer industry is still worth an estimated $21.2 billion. But the question is how much of that industry — that OfficeMax and Office Depot helped pioneer — hasn’t already been gobbled up by e-commerce, discount or wholesale retailers?