Today, NVIDIA shares plunged more than 19%. This is a stock that was trading at $12 six years ago and its fans were arguing that Nvidia should replace Netflix, Inc. (NFLX) in the FAANG group. Here is how FT explains the sharp decline:

“Cryptocurrency miner demand for Nvidia chips raised revenue last year. But the decision to stock up on the cards was a bad one. As prices for cryptocurrencies such as bitcoin fell, so did demand. Nvidia’s core gaming unit, which sold the cards used for crypto-mining, still makes up the bulk of revenue. The drop in demand means total revenue for the third quarter looks disappointing at $3.8bn. The 21 per cent increase on last year is puny against the usual 50 per cent plus quarterly growth that has powered the stock price. More worrying is a 7 per cent year-on-year fall in revenue forecast for the next quarter. If correct it will mark the company’s first revenue decline in more than five years. Nvidia thinks its “crypto hangover” will be temporary — and it will. New gaming chips released recently will find a bigger audience next year. It is still investing heavily in R&D too — which should mean new revenue streams to come. Operating expenses are up nearly 30 per cent on last year. A sell-off since October along with the rest of the tech sector, plus the after hours share price fall means Nvidia’s stock is trading at about 20 times expected earnings. That is still more than Intel, the world’s biggest semiconductor company, which trades at 11 times forecast earnings. The long-term potential for growth is unchanged. Nvidia has more exciting opportunities than its peers.”

To the average investor there are a lot of indicators stock traders can use to grade their stock investments. Two of the less known indicators are hedge fund and insider trading interest. Our experts have shown that, historically, those who follow the best picks of the best investment managers can trounce the market by a healthy amount (see the details here). We were also able to generate large returns even by identifying short candidates. Our portfolio of short stocks lost 26.1% since February 2017 even though the market was up nearly 19% during the same period. We just shared a list of 11 short targets in our latest quarterly update.

What have hedge funds been doing with NVIDIA Corporation (NASDAQ:NVDA)?

At Q3’s end, a total of 56 of the hedge funds tracked by Insider Monkey were long this stock, a change of -2% from the second quarter of 2018. Below, you can check out the change in hedge fund sentiment towards NVDA over the last 7 quarters. With hedgies’ sentiment swirling, there exists an “upper tier” of noteworthy hedge fund managers who were increasing their holdings significantly (or already accumulated large positions). 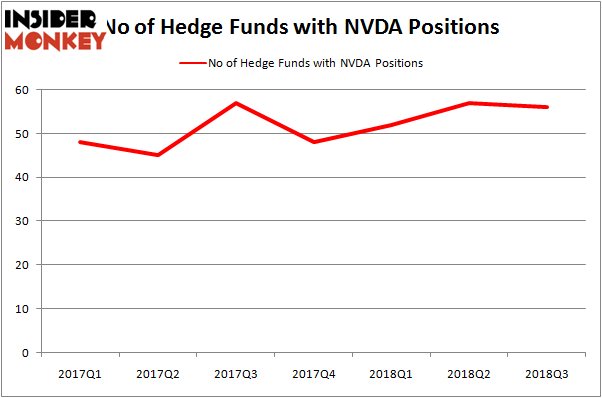 Seeing as NVIDIA Corporation (NASDAQ:NVDA) has experienced declining sentiment from the entirety of the hedge funds we track, it’s easy to see that there exists a select few hedge funds that slashed their entire stakes last quarter. At the top of the heap, Josh Resnick’s Jericho Capital Asset Management dumped the largest stake of all the hedgies monitored by Insider Monkey, totaling about $79.3 million in stock, and Matthew Hulsizer’s PEAK6 Capital Management was right behind this move, as the fund dropped about $39.1 million worth. These transactions are important to note, as aggregate hedge fund interest was cut by 1 funds last quarter.

As you can see these stocks had an average of 59.25 hedge funds with bullish positions and the average amount invested in these stocks was $5078 million. That figure was $4088 million in NVDA’s case. Comcast Corporation (NASDAQ:CMCSA) is the most popular stock in this table. On the other hand TOTAL S.A. (ADR) (NYSE:TOT) is the least popular one with only 13 bullish hedge fund positions. NVIDIA Corporation (NASDAQ:NVDA) is not the least popular stock in this group but hedge fund interest is still below average. This is a slightly negative signal and we’d rather spend our time researching stocks that hedge funds are piling on. In this regard CMCSA might be a better candidate to consider a long position than Nvidia. We also don’t want to catch a falling knife at this point.