Berkshire Hathaway Inc. (NYSE:BRK.B) is back in buy mode. The company snatched up NV Energy, Inc. (NYSE:NVE), calling into question the recent utilities pullback we’ve seen over the past month. And while “monkey see, monkey do” is the fastest way to financial ruin, the Oracle of Omaha may know something we don’t. Let’s look at why Warren Buffett loves this dividend stock and whether any other utility dividend stocks offer similar deals.

The details
Berkshire Hathaway Inc. (NYSE:BRK.B)’s MidAmerican Energy subsidiary announced Wednesday that it has agreed to acquire NV Energy, Inc. (NYSE:NVE) for $5.59 billion. That equates to $23.75 per share, a 23% premium over its pre-announcement closing price. Once NV’s debt is added into the deal, MidAmerican will have coughed up $10 billion for this dividend stock.

In a press release, Buffett noted: “This is a great fit for Berkshire Hathaway Inc. (NYSE:BRK.B), and we are pleased to make a long-term investment in Nevada’s economy. Through MidAmerican, we have found in NV Energy, Inc. (NYSE:NVE) a great company with similar values, outstanding assets, and a superb management team.”

According to MidAmerican President and CEO Greg Abel, the mastermind behind the deal, the acquisition has been a long time coming. Abel had been in talks with NV for several years and sees significant upside to the deal. In an Omaha World-Herald interview, Abel reflected: “[T]hey’ve got a very good management team. They have excellent regulated assets, and we view Nevada as an excellent place for investment long-term.”

What makes NV a Buffett buy?
Dividend stocks, and utilities specifically, are a natural fit for Berkshire Hathaway Inc. (NYSE:BRK.B). Regulation allows electricity companies to maintain steady earnings through good times and bad. Even though NV is based in recession-ravaged Nevada, the corporation’s sales have dropped just 15% since 2009. Even better, its bottom line has recently headed higher for an overall 54% net profit gain in the last five years. 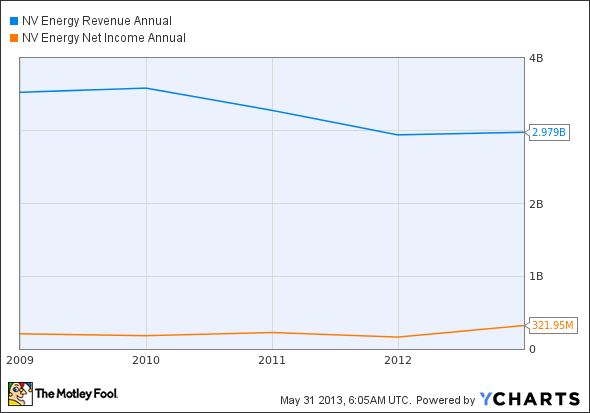 Buffett is famous for his quote “It’s far better to buy a wonderful company at a fair price than a fair company at a wonderful price,” and NV seems to be the former. Even after shares skyrocketed this week, the dividend stock trades at just 17 times last year’s earnings. And while Berkshire Hathaway Inc. (NYSE:BRK.B) doesn’t distribute dividends itself because it’s smarter than you, NV’s 3.8% yield serves as another solid signal that this company’s earnings aren’t going anywhere.