Last week, Warren Buffett’s Berkshire Hathaway (NYSE:BRK.B) ended its buyer’s break with the acquisition of utility NV Energy, Inc. (NYSE:NVE). Amidst overvaluation fears, the Oracle of Omaha paid a 23% premium for his newest subsidiary. Here are three reasons why Buffett was probably enamored with NV, as well as three companies with similar offerings.

1. Steady as she grows
Buffett enjoys upside in his acquisitions just as much as the next investor, but he avoids pubescent growth stocks like Tesla Motors Inc (NASDAQ:TSLA) or Facebook Inc (NASDAQ:FB) like the plague. Utilities offer steady, regulated earnings with sustainable profits. Not only does this allow utilities to distribute dividends, but it offers risk-averse, long-term investors an easy in.

Ameren Corp (NYSE:AEE) is making leaps and bounds in the regulatory world. In the past two weeks, the Illinois legislature has approved new policies to allow the company to pass on costs to consumers for (a) smart grid modernization projects and (b) natural gas infrastructure expansion. Despite increased spending to the tune of an estimated $970 million, the utility expects its overall rate base to expand at a 7% compound annualized growth rate over the next four years. 2. Build from the bottom
It’s no secret that top-line sales are falling for utilities. The Great Recession has dramatically dropped electricity use, and utilities can no longer rely on soaring top lines to cushion big spending. NV Energy, Inc. (NYSE:NVE) is no different. Over the past five years, sales have tumbled just more than 15% to $3 billion. But for the same period, operating income has soared 42% to $785 million and net income clocked in with a 54% jump to $322 million. 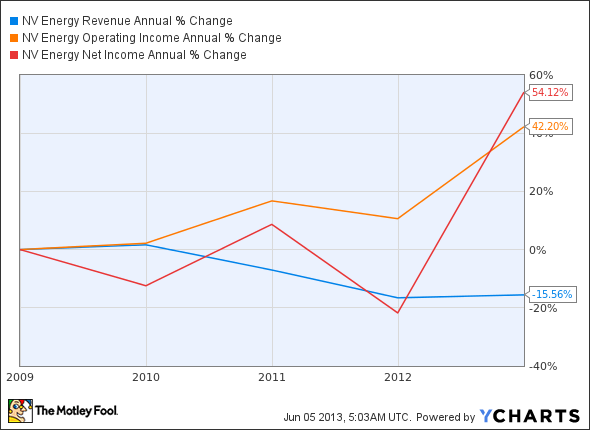 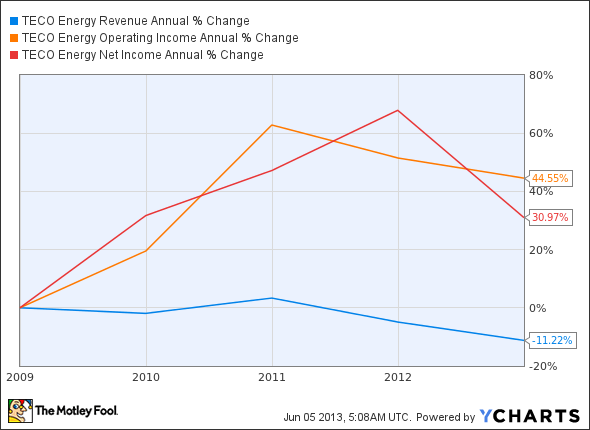 3. Location, location, location
The NV deal was sealed through Berkshire’s subsidiary MidAmerican Energy, and its CEO Greg Abel has had his eye on NV Energy, Inc. (NYSE:NVE) for some time. Beyond its “good management team” and “excellent regulated assets,” Abel made it known in an Omaha World-Herald interview that “[we] view Nevada as an excellent place for investment long-term.”