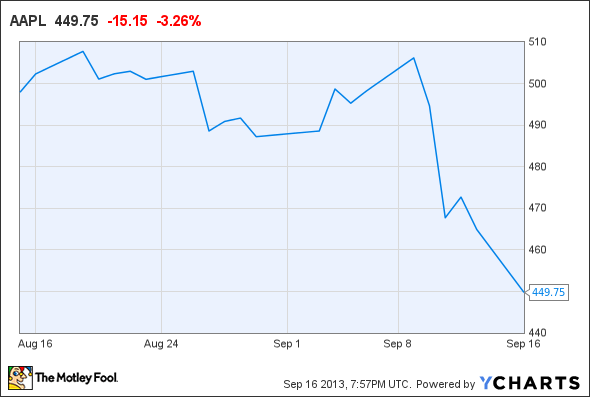 Apple Inc. (NASDAQ:AAPL)’s fall seems to be largely a reaction to the company’s decision to charge $549 for the unlocked iPhone 5c in the U.S. (and more in most foreign countries). Investors are particularly worried that Apple will struggle to grow without a cheaper iPhone.

However, these concerns are overblown. In fact, Apple Inc. (NASDAQ:AAPL)’s pullback over the past week has created a great buying opportunity for investors who missed out on the stock’s summer run-up.

Reasons for panic
Most of the investment community was blindsided by Apple’s decision to introduce the iPhone 5c at a premium price point, rather than making it an entry-level phone. Many analysts are now worried that iPhone sales will fall short of their prior estimates, due to the lack of a $300-$400 iPhone.

The iPhone 5c turned out to be more expensive than most analysts expected (Photo: Apple)

If anything, the initial downbeat reaction has been increased by the apparently slow pace of iPhone 5c pre-orders. Apple began taking iPhone 5c pre-orders last Friday, and most colors and options are still available for delivery this Friday (the release date).

Don’t sweat the demand
There are a few reasons why investors should take all of these findings with a grain of salt. First, the iPhone 5s — Apple’s new top-of-the-line model — hasn’t even been available for pre-order. Devoted Apple fans are more likely to want the 5s rather than its less-powerful sibling. In the U.S., the $100 price difference between the two models is not a big stumbling block, compared to the overall cost of smartphone service.

Second, some analysts have pointed out that iPhone 5 supplies were very tight initially, due to manufacturing challenges. By contrast, the iPhone 5c’s plastic casing and similarity to the iPhone 5 have probably helped Apple Inc. (NASDAQ:AAPL) avoid similar supply constraints. In other words, it’s not necessarily a bad thing that the iPhone 5c is still in stock.

Finally, many smartphone users in the U.S. — still the largest iPhone market by far — upgrade every two years. Since the iPhone 4S was released in October of 2011, much of the U.S. upgrade demand may be pushed out to October and thereafter. By contrast, the iPhone 4 was released in June 2010, so last year there were plenty of people who had already reached the two-year mark and were ready to upgrade when the iPhone 5 was released in September.

It’s also worth noting that Apple’s new agreement with Japan’s largest wireless carrier, NTT Docomo Inc (ADR) (NYSE:DCM), opens up a large new market. Apple is already the leading smartphone vendor in Japan, and this partnership should further entrench Apple there. A deal with China Mobile Ltd. (ADR) (NYSE:CHL), the largest carrier on the planet with over 700 million subscribers, is probably not far behind.