The electrical grid is notoriously slow to change. Since the days when Thomas Edison debated the merits of A/C versus D/C power transmission, the biggest debates in electrical generation have been about whether to use natural gas or coal for power. But that’s all changing as the cost of traditional energy sources rises, and that of alternative energy falls, and it becomes viable to generate power on-site.

The big question is: What does the future of electric energy look like?

Coal takes a tumble
It’s no secret that the coal industry has struggled since President Obama took office: 15,000 MW of coal supply has been taken off the market due to uncompetitive costs and the sheer age of the plants. Some of the industry’s struggles have been due to increased regulations put in place under the Obama administration, but another big driver is the low cost of natural gas, which has become the country’s most used fuel for generating electricity. 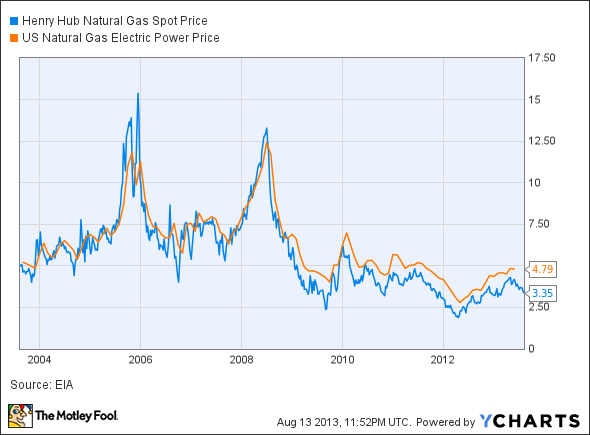 As recently as a few years ago the coal industry provided most of the country’s power, but that’s been turned on its head recently. Natural gas is now in favor due to lower costs and lower emissions, something that will keep it on top until another energy source with even lower costs and fewer emissions emerges.

Renaissance in nuclear falls flat
This was supposed to be a time for a nuclear renaissance in the U.S. The economic stimulus plan passed during the recession included money to guarantee nuclear plants, and a number of companies made big plans to build new capacity. But the excitement has cooled considerably and, one by one, companies have abandoned nuclear plants altogether.

NRG Energy Inc (NYSE:NRG) was one of the first to give up on its grand nuclear plans in 2011, while Duke Energy Corp (NYSE:DUK) recently announced it would retire its Crystal River nuclear plant and stop pursuing the $25 billion Levy County nuclear project as well. The Southern Company (NYSE:SO)‘s Plant Vogtle in Georgia is also coming under fire for being uncompetitive compared to natural gas generating, and even renewable energy, sources.

New nuclear plants have been cancelled domestically; internationally, the trends don’t look good either. Germany has said it will close all of its nuclear plants, and since the Fukushima Daiichi disaster in Japan, that country is looking at solar as an alternative source of energy.

There’s still hope for nuclear growth in China but the momentum that nuclear backers thought they had gained in developed countries is evaporating. High costs for nuclear power and new low-cost alternatives will keep the industry down for the foreseeable future.

Solar emerges as a viable energy source
A decade ago solar energy was a pipe dream that only made sense in countries like Germany where the energy source was highly subsidized. Today, the solar is cost competitive with the grid in many parts of the world without subsidy, its costs continue to fall, and installations in markets like the U.S. are exploding.