The government requires hedge funds and wealthy investors with over a certain portfolio size to file a report that shows their positions at the end of every quarter. Even though it isn’t the intention, these filings level the playing field for ordinary investors. The latest round of 13F filings discloses the funds’ positions on June 30. We at Insider Monkey have made an extensive database of more than 700 of those elite funds and prominent investors’ filings. In this article, we analyze how these elite funds and prominent investors traded Novo Nordisk A/S (ADR) (NYSE:NVO) based on those filings.

Hedge fund ownership of Novo Nordisk A/S (ADR) (NYSE:NVO) has gone nowhere in 2018, remaining flat throughout the first-half of this year. 18 of the hedge funds tracked in our database were long the stock on June 30, which included it ranking as one of the 25 Dividend Stocks that Billionaire Ken Fisher is Bullish On, as Fisher Investments owned 13.79 million shares of the stock on September 30. Novo Nordisk’s dividend payout ratio is still less than 60% despite doubling during the current decade.

At the moment there are many formulas stock market investors put to use to analyze their holdings. A couple of the most underrated formulas are hedge fund and insider trading sentiment. Our experts have shown that, historically, those who follow the top picks of the top money managers can beat the S&P 500 by a very impressive margin (see the details here).

How have hedgies been trading Novo Nordisk A/S (ADR) (NYSE:NVO)?

At the end of the third quarter, a total of 18 of the hedge funds tracked by Insider Monkey were bullish on this stock, unchanged from the previous quarter. By comparison, only 12 hedge funds held shares or bullish call options in NVO in the middle of 2018. With hedgies’ positions undergoing their usual ebb and flow, there exists an “upper tier” of key hedge fund managers who were upping their stakes considerably (or already accumulated large positions). 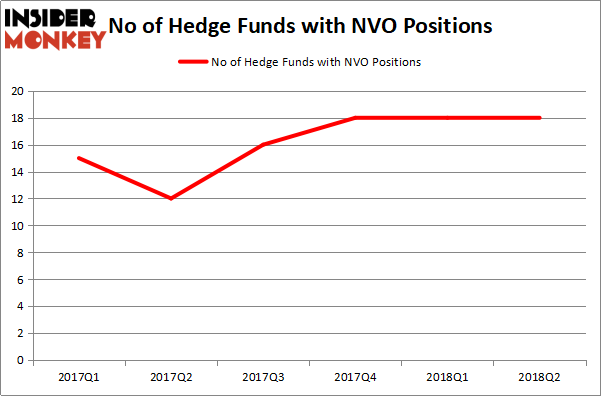 Among these funds, Renaissance Technologies held the most valuable stake in Novo Nordisk A/S (ADR) (NYSE:NVO), which was worth $882.8 million at the end of the second quarter. On the second spot was Fisher Asset Management which amassed $625.8 million worth of shares. Moreover, Sabby Capital, Sabby Capital, and HighVista Strategies were also bullish on Novo Nordisk A/S (ADR) (NYSE:NVO), allocating a large percentage of their portfolios to this stock.

Seeing as Novo Nordisk A/S (ADR) (NYSE:NVO) has experienced a decline in interest from the entirety of the hedge funds we track, we can see that there lies a certain “tier” of hedgies that elected to cut their entire stakes heading into Q3. It’s worth mentioning that Samuel Isaly’s OrbiMed Advisors sold off the biggest stake of the “upper crust” of funds watched by Insider Monkey, valued at about $9.9 million in stock, and Glenn Russell Dubin’s Highbridge Capital Management was right behind this move, as the fund dropped about $3.1 million worth. These bearish behaviors are intriguing to say the least, as aggregate hedge fund interest stayed the same (this is a bearish signal in our experience).

As you can see these stocks had an average of 25 hedge funds with bullish positions and the average amount invested in these stocks was $1.06 billion. That figure was $1.82 billion in NVO’s case. Union Pacific Corporation (NYSE:UNP) is the most popular stock in this table. On the other hand Royal Bank of Canada (USA) (NYSE:RY) is the least popular one with only 13 bullish hedge fund positions. Novo Nordisk A/S (ADR) (NYSE:NVO) is not the least popular stock in this group but hedge fund interest is still below average. This is a slightly negative signal and we’d rather spend our time researching stocks that hedge funds are piling on, like UNP.