The U.S. economy is showing signs of recovery to pre-recession levels, and personal disposable income has skyrocketed since late 2009. Given this, we may be poised for a boom in the tourism industry soon. That’s why I’m analyzing the 3 top publicly traded cruise liners to see if any are investment worthy as the summer doldrums approach. 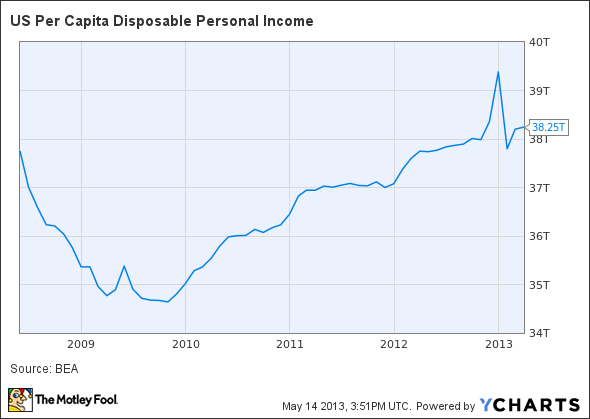 US Per Capita Disposable Personal Income data by YCharts

Norwegian Cruise Line Holdings Ltd (NASDAQ:NCLH) went public this year, and investors have been taking the opportunity to invest in the international cruise liner. Norwegian Cruise Line Holdings Ltd (NASDAQ:NCLH) has a significant amount of ports in America and itineraries that go all over the globe. The company went public in January this year, and used the proceeds to pay off senior debt due in 2016. The company has brought in $2.3 billion in revenue in the trailing twelve months.

Their first-quarter results were dismal, as it lost $0.49 per share, despite a consensus of a profit of $0.03. Since then, the stock has dropped 5% to about $30.50, and retains a P/E that hovers around 70. While this might seem high at first glance, company’s P/E is significantly lower than the industry average of 100.

Norwegian Cruise Line Holdings Ltd (NASDAQ:NCLH) plans to add the Norwegian Breakaway, a new cruise line that will be docking in New York, to add to their already impressive fleet.

NASDAQ:NCLH), as well as a small amount of worldwide lodges and motor coaches. And even though the company is similar, it has more risk (and possibly more reward) than the other publicly traded cruise liners.

Carnival Corporation (NYSE:CCL), unlike Norwegian Cruise Line Holdings Ltd (NASDAQ:NCLH), had a great first quarter. It increased cruise capacity by 4%. Carnival doesn’t expect to keep up the momentum, however. The company dropped its outlook for annual earnings from $2.20 to $1.95 due to a decline in bookings. Economic instability in Europe is partly to blame. The other factor seems to be the recent “Triumph Incident,” when one of Carnival Corporation (NYSE:CCL)’s Cruise Ships was stranded in the Gulf of Mexico for days. The bad media attention proceeded to hamper sales.