I understand the need for companies to put on a good front and say that they are pleased with the work of their employees. However, sometimes a CEO needs to step up and just tell it like it is. Unfortunately for Norfolk Southern Corp. (NYSE:NSC) investors, this isn’t happening. The reality is, this company is doing worse than their competition by three different metrics, and management isn’t owning up to these problems.

The Big 3 is becoming a 2 person race
Ever since Berkshire Hathaway Inc. (NYSE:BRK.B) purchased Burlington Northern, there have been three major railroads for investors to choose between. Norfolk Southern Corp. (NYSE:NSC) and CSX Corporation (NYSE:CSX) have been fighting over the eastern seaboard for years, and Union Pacific Corporation (NYSE:UNP) has a rivalry with Burlington Northern out west.

These publicly traded railroads probably look pretty interchangeable to the novice investor. Each company pays a decent yield, they are all expected to grow their earnings by 10% or better, and they all basically do the same thing. However, when you dig into the numbers, this race between the big 3 public railroads is quickly becoming a two person race. 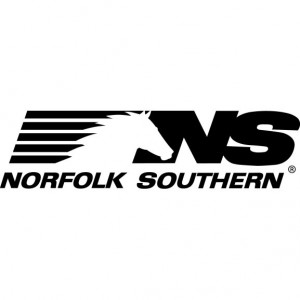 What’s really sad is that Norfolk Southern Corp. (NYSE:NSC)’s management isn’t just flat out saying their performance isn’t acceptable. In fact, their CEO Wick Moorman actually made the statement that, “We’re pleased with Norfolk Southern’s first-quarter results.” He went on to praise the company’s, “superior operating performance.” I’m here to tell you, there isn’t much superior about Norfolk relative to their peers.

This industry is a challenge, but Norfolk Southern is doing the worst
Unless you have been living under a rock, you know that the coal industry has been problematic for a while. Companies from Peabody Energy Corporation (NYSE:BTU) to Arch Coal Inc (NYSE:ACI) have had to cut dividends, cut earnings projections, and most of all they have seen their stock prices cut. Since railroads move coal shipments from point A to point B, when the coal industry sees weak demand, it hurts the railroad.

It has been true that Union Pacific Corporation (NYSE:UNP) has done better than the other two in coal revenues for multiple quarters. I’ve made the argument several times that Union Pacific is the best in its industry. However, until this quarter, CSX and Norfolk Southern Corp. (NYSE:NSC) were both suffering drops of as much as twenty percent or more in coal revenue.

In the current quarter, the gap between Union Pacific and CSX Corporation (NYSE:CSX) versus Norfolk Southern became even more apparent. Union Pacific saw a drop of just 6% in coal, and CSX reported a 10% decline. Norfolk Southern managed to underperform with a decline of 17%. Since 23% of Norfolk’s revenue comes from coal, this underperformance put a major drag on results.

Can’t fix an ailing industry, but this number is the company’s fault
I realize that companies can’t do much about an industry that is suffering, but what the company can do is attempt to cut their expenses to try and manage through this challenge. In the last three months, while Union Pacific and CSX took cars offline to match demand and supply, Norfolk Southern Corp. (NYSE:NSC) apparently didn’t get the memo.

Looking at each company’s operating margin, Union Pacific led the way with a margin of 30.87%. The company has consistently outperformed its peers by this measure, but the gap with CSX is beginning to close. In fact, in the last quarter, CSX reported an operating margin of 29.58%, which was up from 28.86% last year. By comparison, Norfolk Southern Corp. (NYSE:NSC)’s operating margin came in at just 25.24%. When your competition’s margins are 17% and 22% better than yours, there is nothing to be “pleased” about.