Noodles & Co (NASDAQ:NDLS) is a newcomer to the fast-casual restaurant sector. Even before the IPO I had hoped this company–on the top-ten growth list for several years–would go public so that I could get a piece of the action. But since the company went public my outlook has been cautious, and a 16% decline from recent highs may confirm this company’s ongoing stock problem: valuation. Why is this company still overvalued?

Noodles & Co (NASDAQ:NDLS) currently comes at a premium price, with a P/E ratio of 200, and Forward P/E of 73. The current P/E ratio is slightly skewed since it reflects one-time costs associated with the IPO, but even still the Forward P/E is much higher than some rapid-growth competitors.

Chipotle Mexican Grill, Inc. (NYSE:CMG) sports a P/E ratio nearly twice the industry average of 22, but the market is willing to support this valuation. In the most recent quarter revenue was up 18% year-over-year, net income was up 7.5%, and it opened 44 new locations. This growth is among the best in the business, but for Chipotle Mexican Grill, Inc. (NYSE:CMG) this is business as usual. The company has no plans to slow down, which makes its valuation understandable.

Buffalo Wild Wings (NASDAQ:BWLD) also has a relatively high P/E ratio, but like Chipotle Mexican Grill, Inc. (NYSE:CMG) it seems warranted. In its most recent quarter Buffalo Wild Wings (NASDAQ:BWLD) increased revenue 28%, net income was up 41%, and the company opened 21 new locations. These openings are just the tip of the iceberg, as management expects to open up to 62 more locations before years end, and 500 over the next couple of years. Judging past performance, I see no reason not to expect that this will indeed happen.

Without a doubt, Noodles & Co (NASDAQ:NDLS) must continue to grow in order to justify its current valuation. As mentioned, the company has been a top-ten grower in the restaurant industry, and this year is no exception. Management reported that it opened 21 new locations in the 2nd quarter–this looks to position it to achieve 50 openings this year, or 15% unit growth. Get used to this kind of growth–this 348-unit chain is expecting to open 2,500 location in 15 years.

Comp-sales can be a good way to measure customer satisfaction, as it often is directly related to restaurant traffic. Last quarter, Noodles increased comp-sales 4.4%, growing this metric for the 29th time in 30 quarters.

Restaurant unit growth combined with ever-increasing comp-sales bode well for this chain’s profits. These are its strengths. Yet there are some lingering concerns.

In a previous article, I pointed out that Noodles’ profit margin is significantly lower than its competitors. 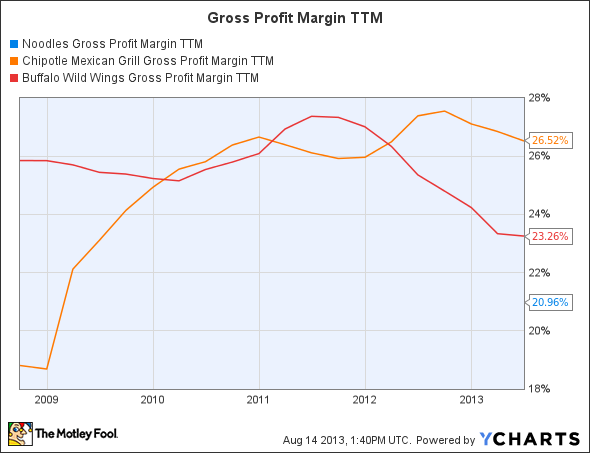 Although the profit margin is significantly lower than its competitors’ margin, Noodles’ margin improved this last quarter, which may seem like good news. But management stated that the principle reason for the improved margin is lower food costs coupled with higher menu prices.

Don’t expect this benefit to be carried forward. Management stated that food costs should go up in the 2nd half of the year, and there won’t be any more price increases this year. Profit margin should therefore fall once again.

Noodles is generating a ton of revenue, as company owned restaurants rake in almost $1.2 million each per year. Even with all the new restaurants coming, if this margin issue is not addressed the profits needed to justify this valuation won’t come.

A popular restaurant concept and an extremely fast expansion plan have made Noodles & Co (NASDAQ:NDLS) the talk of the town. But with a forward P/E of over 70, this chain seems to be overvalued, even after the decline from recent highs. I’ll sit one out until management comes up with a concrete plan to improve margins.

The article Do You Have a Problem with Noodles? originally appeared on Fool.com.

McDonald’s Corporation (MCD): Are Hedge Funds Right About This Stock?