Noble Energy, Inc. (NBL): This Nat-Gas Bonanza Might Be Too Late to Save Cyprus

Cyprus is moving ahead with its plan to become one of Europe’s rare bright spots in a nat-gas boom that’s largely passed it by. Earlier this week, the bailed-out island nation’s Cabinet moved ahead with a preliminary agreement to allow Noble Energy, Inc. (NYSE:NBL) and its Israeli partner Delek Drilling (and its subsidiary Avner Oil Exploration) to build a natural gas processing and export facility to take advantage of the major offshore discovery Noble Energy, Inc. (NYSE:NBL) revealed in late 2011. The $13.4 billion plant (roughly the cost of Cyprus’ bailout) would be operational by 2020 to handle an estimated 7 trillion cubic feet of natural gas that Noble discovered two years ago.

Will it be enough to revive Cyprus and move Europe along the path to energy independence? On its own, probably not — but it’s a pretty good start.

The cache under Cyprus
Before this discovery, Cyprus didn’t even register on the charts of the world’s most gas-rich nations. The European Union borders on some of the richest — Russia and Iran had the two largest national nat-gas reserves in the world in 2011 — but the EU itself had approximately 175 trillion cubic feet beneath its member nations at the end of 2011.

Noble Energy, Inc. (NYSE:NBL) and Delek control the current find, but there are several other promising blocks leased to France’s Total SA (ADR) (NYSE:TOT) and Italy’s Eni SpA (ADR) (NYSE:E), both of which could also participate in developing the export terminal. This would be a more lucrative proposition for Cyprus than it might be in the U.S., because present nat-gas prices in the EU are more than four times as high as they are in the United States: 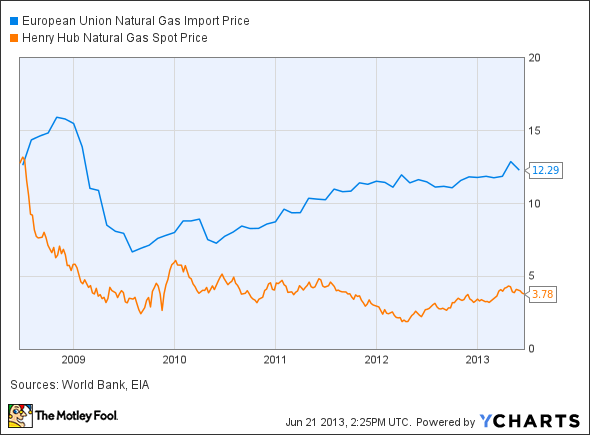 This price represents a million BTU, which is roughly equivalent to 1,000 cubic feet of natural gas. At current prices, the raw EU import value of Cyprus’ proven reserves, largely controlled by Noble Energy, Inc. (NYSE:NBL), is about $86 billion, or more than 3.5 times its national GDP. But it will take time for this potential to become reality — the International Energy Agency’s best-case scenario doesn’t expect more than $3 billion in economic benefit by 2020, with about a third of that in tax revenue. That’s a long time to wait for a country already headed toward a depression in a region that’s been rather economically unforgiving over the past few years.

The end result could be a bonanza for Noble Energy, Inc. (NYSE:NBL) that comes too late to revive a floundering Cypriot economy. The country’s best bet for the near term might be to front-load the return on this and future discoveries, but that might be dangerous for both the nation and its principal corporate energy partners if the situation winds up destabilizing, as it has been in Greece of late.

The article This Nat-Gas Bonanza Might Be Too Late to Save Cyprus originally appeared on Fool.com and is written by Alex Planes.

Fool contributor Alex Planes holds no financial position in any company mentioned here. Add him on Google+ or follow him on Twitter, @TMFBiggles, for more insight into markets, history, and technology.The Motley Fool recommends Total.