NIKE, Inc. (NYSE:NKE): Are Hedge Funds Right About This Stock?

Is NIKE, Inc. (NYSE:NKE) ready to rally soon? Hedge funds are taking an optimistic view. The number of bullish hedge fund bets increased by 10 recently. Our calculations also showed that NKE isn’t among the 30 most popular stocks among hedge funds.

What have hedge funds been doing with NIKE, Inc. (NYSE:NKE)? 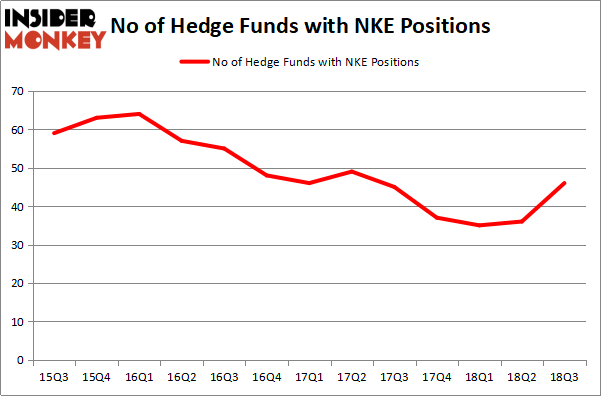 As one would reasonably expect, some big names have jumped into NIKE, Inc. (NYSE:NKE) headfirst. Coatue Management, managed by Philippe Laffont, created the most valuable position in NIKE, Inc. Coatue Management had $115 million invested in the company at the end of the quarter. Matthew Hulsizer’s PEAK6 Capital Management also initiated a $38.8 million position during the quarter. The following funds were also among the new NKE investors: Jim Simons’s Renaissance Technologies, Richard Driehaus’s Driehaus Capital, and Lei Zhang’s Hillhouse Capital Management.

As you can see these stocks had an average of 48.25 hedge funds with bullish positions and the average amount invested in these stocks was $3485 million. That figure was $1918 million in NKE’s case. Adobe Systems Incorporated (NASDAQ:ADBE) is the most popular stock in this table. On the other hand, BHP Group Limited (NYSE:BHP) is the least popular one with only 19 bullish hedge fund positions. NIKE, Inc. (NYSE:NKE) is not the least popular stock in this group but hedge fund interest is still below average. This is a slightly negative signal and we’d rather spend our time researching stocks that hedge funds are piling on. In this regard, ADBE might be a better candidate to consider a long position.