NIKE, Inc. (NKE), Under Armour Inc (UA): Which of These Companies Will Run Faster?

Statistics might suggest that the running shoe industry in the U.S. has matured with just 1% growth last year, but NIKE, Inc. (NYSE:NKE) and Adidas are still betting on this market. And they are not the only ones, as analysts at Credit Suisse are also predicting that growth for these two giants will mostly come from their new running shoes.

With the new hi-tech light weight sneakers fetching prices north of $150, the market is going through a transformation. Not only are light weight shoes more expensive, their longevity is much lesser than the heavier shoes. This results in a quicker replenishment cycle. So, once the trend catches on, we can expect some momentum to return to this sector.

The question that is on everybody’s minds is that which of the two big names will make it bigger in the long run? 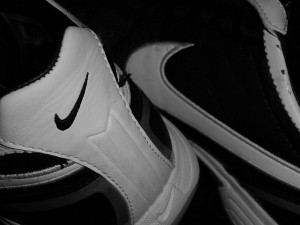 NIKE, Inc. (NYSE:NKE) has launched its Flyknit range of running shoes while Adidas is bringing to the market its new Energy Boost sneakers.

The Flyknit range of shoes is aimed to provide a comfortable sock like feeling while Energy Boost asserts that it can make runners run faster and longer. The Flyknit technology uses computerized weaving technique to weave the entire upper part of the shoe from a single thread. One the other hand, Energy Boost uses a cushioning material which looks like Styrofoam and gives more bounce.

Both companies are claiming that their shoes will revolutionize the market. It is true that retail stores have willingly provided shelf space to these high priced shoes, but it will take some more time before we get clear indications regarding customer preference.

The U.S. running shoe market is estimated to be around $14 billion according to researcher SportsOneSource, and it is dominated by NIKE, Inc. (NYSE:NKE). The company holds around 60% market share. It enjoys good demand for its light weight and performance driven shoes. According to the research firm NPD, this demand is likely to stay strong.

Therefore, it is beyond contention that Nike will continue to rule the market in the coming months, but it is important to keep an eye in which way the market share will move. Adidas has around 10% share in the market for running shoes.

How the two companies are faring?

NIKE, Inc. (NYSE:NKE) had last reported its third quarter earnings on March 21. The results were a mixed bag. The company missed revenue estimates, reporting $6.19 billion while consensus estimates called for $6.23 billion. However, it beat the bottom line estimates, earning $0.73 per share while analysts were expecting $0.67 per share. The company witnessed an 18% increase in its North American sales driven by footwear.

In addition to the upsides from the recent sneaker launches, the favorable outlook on the stock stems from its recent margin expansion. Gross margin improved for the first time in the last two years. This is likely to continue given the company’s better pricing power. Analysts are expecting NIKE, Inc. (NYSE:NKE) to hike its prices by about 3% annually for the next few years.

The company launched a bunch of technology driven accessories last year which should increase its appeal with the younger generation. It has always been a concern with Nike that it is more popular with middle-aged consumers.

Internationally, the company is poised to benefit from the 2014 FIFA World Cup and also the Olympics couple of years later. Both events will be in Brazil and NIKE, Inc. (NYSE:NKE) sponsors the Brazil Football team. Meanwhile, it is expecting to return to profitability in China by next year.

Now, let’s take a look at Adidas, which recently announced its first-quarter earnings. Its revenue dipped 2% to $4.9 billion from $5.01 billion a year ago, but its earnings grew by a good 6% to $404 million, or $1.92 per share. The company saw a 2% increase in sales in North America and 6% in China. This was offset by a 6% decline in Europe.