Will the new coronavirus cause a recession in US in the next 6 months? On February 27th, we put the probability at 75% and we predicted that the market will decline by at least 20% in (Recession is Imminent: We Need A Travel Ban NOW). In these volatile markets we scrutinize hedge fund filings to get a reading on which direction each stock might be going. In this article, we will take a closer look at hedge fund sentiment towards NGM Biopharmaceuticals, Inc. (NASDAQ:NGM).

NGM Biopharmaceuticals, Inc. (NASDAQ:NGM) has seen a decrease in enthusiasm from smart money of late. Our calculations also showed that NGM isn’t among the 30 most popular stocks among hedge funds (click for Q4 rankings and see the video at the end of this article for Q3 rankings).

We leave no stone unturned when looking for the next great investment idea. For example, COVID-19 pandemic is still the main driver of stock prices. So we are checking out this trader’s corona catalyst trades. We read hedge fund investor letters and listen to stock pitches at hedge fund conferences. Our best call in 2020 was shorting the market when S&P 500 was trading at 3150 after realizing the coronavirus pandemic’s significance before most investors. Now we’re going to take a look at the latest hedge fund action regarding NGM Biopharmaceuticals, Inc. (NASDAQ:NGM).

What does smart money think about NGM Biopharmaceuticals, Inc. (NASDAQ:NGM)?

Heading into the first quarter of 2020, a total of 7 of the hedge funds tracked by Insider Monkey were bullish on this stock, a change of -22% from the previous quarter. On the other hand, there were a total of 0 hedge funds with a bullish position in NGM a year ago. With hedge funds’ sentiment swirling, there exists a select group of noteworthy hedge fund managers who were adding to their stakes considerably (or already accumulated large positions). 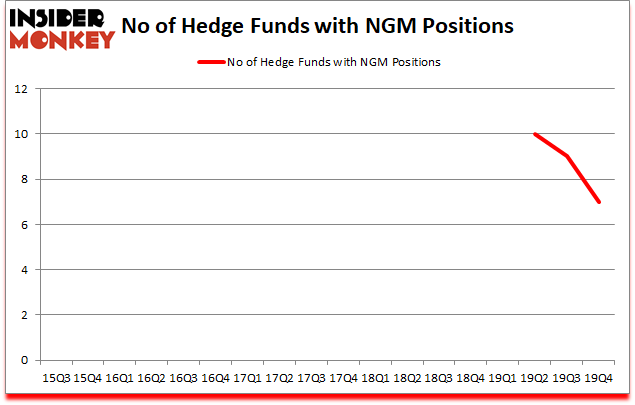 According to publicly available hedge fund and institutional investor holdings data compiled by Insider Monkey, Greenspring Associates, managed by C. Ashton Newhall and James Lim, holds the number one position in NGM Biopharmaceuticals, Inc. (NASDAQ:NGM). Greenspring Associates has a $29.1 million position in the stock, comprising 7.7% of its 13F portfolio. Sitting at the No. 2 spot is Rock Springs Capital Management, led by Kris Jenner, Gordon Bussard, Graham McPhail, holding a $6.5 million position; 0.2% of its 13F portfolio is allocated to the company. Remaining peers with similar optimism comprise Mark Wolfson and Jamie Alexander’s Jasper Ridge Partners, Julian Baker and Felix Baker’s Baker Bros. Advisors and Israel Englander’s Millennium Management. In terms of the portfolio weights assigned to each position Greenspring Associates allocated the biggest weight to NGM Biopharmaceuticals, Inc. (NASDAQ:NGM), around 7.67% of its 13F portfolio. Jasper Ridge Partners is also relatively very bullish on the stock, dishing out 0.37 percent of its 13F equity portfolio to NGM.

Because NGM Biopharmaceuticals, Inc. (NASDAQ:NGM) has experienced bearish sentiment from the entirety of the hedge funds we track, it’s safe to say that there exists a select few fund managers that elected to cut their full holdings by the end of the third quarter. At the top of the heap, Arthur B Cohen and Joseph Healey’s Healthcor Management LP said goodbye to the biggest investment of the “upper crust” of funds monitored by Insider Monkey, worth an estimated $4.4 million in stock. Gavin Saitowitz and Cisco J. del Valle’s fund, Springbok Capital, also dropped its stock, about $0.3 million worth. These moves are intriguing to say the least, as total hedge fund interest dropped by 2 funds by the end of the third quarter.

As you can see these stocks had an average of 17 hedge funds with bullish positions and the average amount invested in these stocks was $183 million. That figure was $48 million in NGM’s case. Rocket Pharmaceuticals, Inc. (NASDAQ:RCKT) is the most popular stock in this table. On the other hand FB Financial Corporation (NYSE:FBK) is the least popular one with only 5 bullish hedge fund positions. NGM Biopharmaceuticals, Inc. (NASDAQ:NGM) is not the least popular stock in this group but hedge fund interest is still below average. Our calculations showed that top 10 most popular stocks among hedge funds returned 41.4% in 2019 and outperformed the S&P 500 ETF (SPY) by 10.1 percentage points. These stocks gained 1.0% in 2020 through May 1st but beat the market by 12.9 percentage points. A small number of hedge funds were also right about betting on NGM, though not to the same extent, as the stock returned -9.8% during the same time period and outperformed the market.