Goldman Sachs is hosting its 12th annual Power & Utility Conference in New York on Thursday, August 8. The one-day event will focus on a variety of topics surrounding the power & utility business, including capital allocation, growth in a regulatory environment, and demand trends across the power, natural gas, and water markets.

The Select Sector Utilities SPDR is a benchmark for the power & utility industry. The ETF has underperformed the S&P 500 so far in 2013 as investors have placed larger bets on cyclical stocks as the U.S. economy continues its slow-but-steady recovery.

As a long-term investor, I’m more concerned with the 5-year history of utility stocks and pay less attention to the current year performance. Simply put, the utility sector has a consistent history of price appreciation and dividend growth through all market cycles. Power & utility stocks also performed better than the S&P 500 during the 2008-09 recession, and the sector has outperformed the market over the last decade. 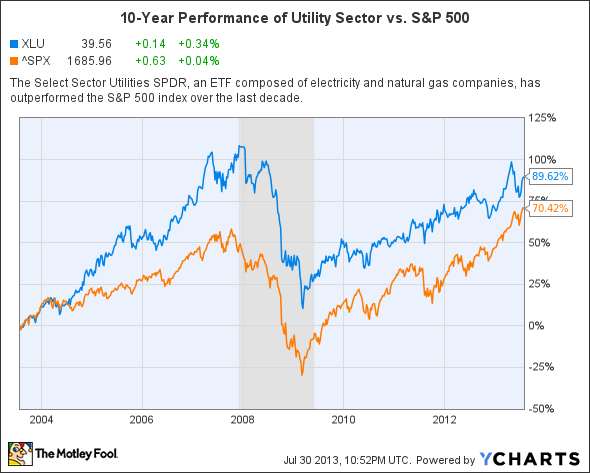 Ahead of the Goldman Sachs conference, here are 3 power & utility companies which could deliver over the next 12 months:

On July 30, NextEra Energy, Inc. (NYSE:NEE) announced second quarter 2013 results of $1.46, significantly higher than the $1.28 consensus EPS. Management provided a full-year forecast of $4.70-$5.00 per share, with actual results likely in the upper half of the range.

Investors in NextEra Energy, Inc. (NYSE:NEE) have strong visibility for earnings and dividend growth through 2016. Last year, the Florida Public Service Commission approved a rate plan which extends through December 2016. The rate agreement will allow Florida Power & Light to earn a return on equity between 9.70% and 11.70%.

NextEra Energy, Inc. (NYSE:NEE) was also chosen as the winner of a $3 billion gas pipeline running from southwestern Alabama to central Florida, expected to be completed by 2017. Chief executive James Robo will be speaking at the upcoming Goldman conference.

Wisconsin Energy Corporation (NYSE:WEC) is presenting at the upcoming Goldman conference and is one of the largest holdings in the Utilities SPDR. The Milwaukee, WI headquartered company operates in two segments: a utility energy segment and a non-utility energy segment.

I believe Wisconsin Energy Corporation (NYSE:WEC) can outperform the utility sector over the next 5 years. Back in May, the company held its annual meeting of shareholders where CEO Gale Klappa outlined his growth plan through 2017. Klappa announced the company’s goal to increase its dividend payout to 65–70% of earnings by 2017, a distribution more consistent with other energy companies.

At the time, Klappa anticipated a double-digit increase in Wisconsin Energy Corporation (NYSE:WEC)’s dividend for 2014, followed by a 7–8% growth in the years 2015 through 2017. The announcement follows a 13.3% dividend increase that took place in January 2013, which raised the annual dividend to $1.36 per share.

Fast-forward to July 18, and Wisconsin Energy Corporation (NYSE:WEC) announced the company would accelerate its 2014 dividend action for the second half of 2013. The news comes following the recent opening of the Oak Creek Power Plant, including two new coal-burning units approved by regulators. The completion of the Oak Creek project brings to a close a decade-long project, which will allow Wisconsin Energy Corporation (NYSE:WEC) to return greater cash flow to shareholders.