NextEra Energy, Inc. (NYSE:NEE) reported earnings yesterday, just missing top-line estimates but pulling through on the bottom. Mr. Market didn’t seem too riled up over revenue, with shares heading up 2%. This dividend growth stock has gained 21.7% over the past year, causing many investors to wonder when this bull is going to run out of steam. With the latest numbers in, here’s what you need to know.

Fallings sales are no news for utilities, and in such a regulated industry, investors should be equally, or even more, concerned with bottom-line numbers. Adjusted EPS came in at $1.46 for Q2 2013, a whopping 14% above predictions and $0.20 more than NextEra managed in Q2 2012.

Over the past five years, NextEra Energy, Inc. (NYSE:NEE) sales have dropped off 12%, but the utility has made more from less with a 13% increase in adjusted EPS. 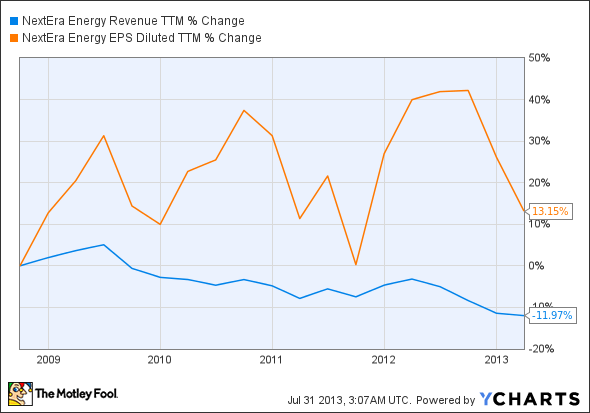 Fueling fundamentals
NextEra Energy, Inc. (NYSE:NEE) has managed some major wins this past quarter. Its nuclear modernization project came in under budget, ahead of schedule, and with 100 more MW than previously expected. At the same time, the company kept its title as the nation’s largest producer of renewable energy by continuing to increase economies of scale with new contracted renewable assets.

On the regulated side, NextEra Energy, Inc. (NYSE:NEE) managed to maintain 11% return on equity for its Florida Power & Light utility, an impressive feat as other regulatory bodies have pushed back on recent rate requests. Duke Energy Corp (NYSE:DUK) announced last week that it will revise its Carolinas rate request down nearly 50%, cutting around $100 million off its retail revenue.

The big news on the Wall Street block is NextEra Energy, Inc. (NYSE:NEE)’s new $3 billion joint-venture partnership with Spectra Energy Corp. (NYSE:SE). The two utilities are teaming up to add a third major natural gas pipeline to Florida’s infrastructure. NextEra hopes to receive regulatory approval by the end of the year, and will front $1 billion for the joint venture, along with $550 million for its own energy center connection.