Newmont Mining Corp (NEM), Barrick Gold Corporation (USA) (ABX): When the Price of Gold Bottoms Out, Which Miners Will Rise? 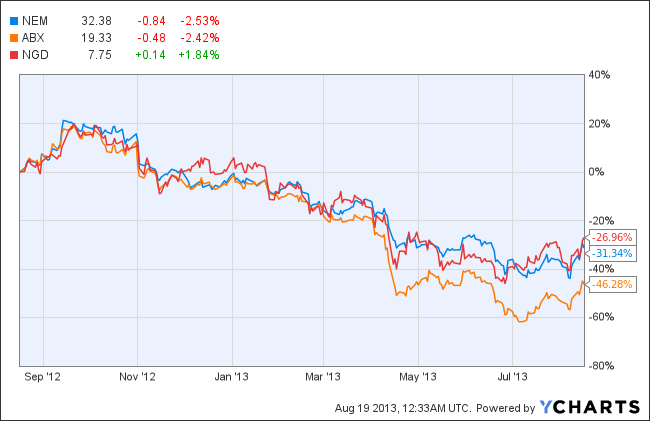 The reason for such a disastrous year is simple.

Regardless of each company’s fundamentals, reserves or cost structure, gold prices have been driving revenue down continuously for the past few months. Gold declined from $1,800 per ounce to $1,309 in a relatively short period. 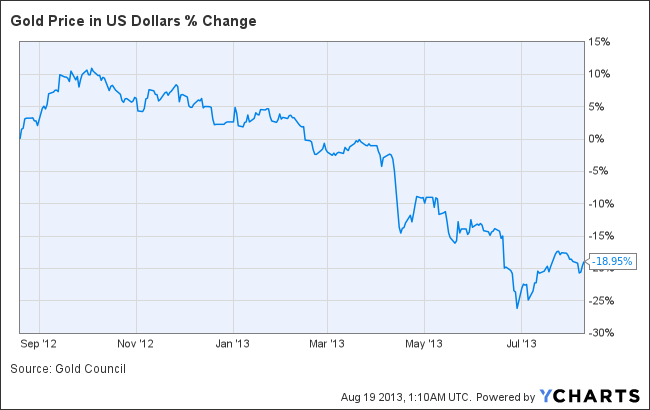 But how far can gold fall?

At some point, gold has to reach a somewhat stable level. This has not happened, yet. But in the meantime, the market may be punishing too severely some of the best gold miners in the world. For example, although gold prices decreased 19% this year, Barrick Gold Corporation (USA) (NYSE:ABX) has shed almost half of its market cap.

Such disproportional patterns make little sense. As gold approaches its fair value, it may be interesting for investors to revisit the prospects of some of the strongest gold miners, to search for undervalued opportunities with stable reserves and solid balance sheets. Such companies will most likely benefit the most from a normalization in gold prices. But before we review some specific companies, when will gold stop falling?

The right time to buy gold is approaching

On the other hand, rising interest rates are associated with positive macroeconomic data and vice-versa. If the economy is depressed, the central bank is more likely to set low interest rates and increase quantitative easing to promote lending and investment, but such measures will also have a negative influence on the price of gold.

Turns out that recent U.S. macroeconomic data shows the economy is making steady progress in recovering from the 2007-2008 financial crisis. At the same time, the default risk in some European economies and fears of conflict in the Middle East have lost momentum. This is causing investors to view gold as less attractive, because they now perceive a more stable, bullish global market.

Notice that what we have seen since 2011 is the opposite of what we saw in the 2008-2011 period: an increase in uncertainty, default risks and flat interest rates.

Such movements took the price of gold far away from equilibrium in the first place. Therefore, it is logical to assume that the price of gold will finally approach its fair level once the crazy demand for gold originated in the 2008-2011 turbulent period gets fully unwound. And looking at recent U.S. economic growth rates, this could happen soon. In the next year or so, gold could be trading at a price similar to 2007 levels, at around $1,000 per ounce.

Now, it’s time to introduce some great gold miners that will benefit the most from a normalization in gold price levels.

Trading only at 9 times earnings, Newmont Mining Corp (NYSE:NEM) is currently focusing on cost control and improvements in free cash flow generation, which could lead to a higher multiple next year, regardless of the price of gold. In the latest earnings call, for example, Newmont Mining Corp (NYSE:NEM) announced a reduction in consolidated spending of $362 million and a reduction in capital spending of $458 million. Also, further progress in the Conga Project in Peru is expected to happen in the next two years. Conga has 6.5 million attributable ounces of gold reserves and 1.7 billion attributable pounds of copper reserves.