Published on November 26, 2019 at 11:44 am by Insider Monkey Staff in Bitcoin, Ethereum and Other Cryptocurrencies, News, Tech

In the far East, China has an interesting fascination with Blockchain, but it doesn’t hesitate to crackdown on cryptocurrency operations. The EU has mostly adopted a wait-and-see approach to the industry and the US is actively looking for ways to regulate the decentralized ecosystem.

This piece explores how the Middle East is evolving on the path to powering the mass-market adoption of Blockchain.

Blockchain is here to stay

Cryptocurrency remains a polarizing subject; its proponents posit that its decentralization makes it a trustworthy means of exchange, but critics argue that its lack of government oversight makes it untrustworthy. Nonetheless, the underlying Blockchain technology is being courted across a large section of industries. For instance, many traditional Wall Street firms are embracing Blockchain and actively exploring its use in their businesses to proactively build competitive advantages for the future.

The chart here tracks the year-to-date performance of three Wall Street stocks that are actively involved in the blockchain industry.

IBM (NYSE:IBM) is an undisputed industry leader in the development of blockchain technology for enterprise use. IBM is involved in about 500 blockchain projects such as IBM Food Trust, we.trade and CLSNet.

Alibaba Group Holding Ltd (NYSE:BABA) is another Wall Street stock with strong associations with the Blockchain industry. Alibaba has more than 90 patents filed for blockchain technology and it has developed several blockchain solutions to optimize its business processes. For instance, its T-mall subsidiary leverages Blockchain in supply chain management to track food adulteration and counterfeiting.

The evolution of Blockchain in the Middle East

Europe is often seen as the breeding ground for all sorts of Blockchain applications, especially with countries such as Estonia and Luxemburg creating regulatory sandboxes for Blockchain startups to experiment and thrive.

Yet, the Middle East has been quietly positioning itself as a Blockchain powerhouse; preferring to build a reputation on building blockchain-powered stuff rather than a PR-fuel reputation on what it plans to do.

UAE is courting the global economy with Blockchain

The United Arab Emirate is an impressive story in economic development; a story which has become a reference point for the emerging economies of South America, Asia, and Africa. UAE’s most popular emirate, Dubai was a newly independent city-state less than 50 years ago. Now, it has been transformed into a sophisticated metropolis on par with other top cities of the world. The main reason behind the UAE’s accelerated development into a global business and tourism destination is the purposeful leadership that embraced modern technology.

The purposeful leadership has also created an enabling environment for emerging technologies, and it is not surprising that the UAE is leading the charge for Blockchain in the Middle East. One of such developments is Emirex, a consortium of several licensed and regulated legal entities proactively meeting the challenging demands of the current regulatory landscape in the blockchain space.

Emirex was founded in 2014 as a technology and advisory provider to legacy businesses interested in how emerging tech such as AI and blockchain could impact their businesses. By 2017, Emirex had realized that the Middle East needed a digital assets exchanger where people can buy and sell cryptocurrencies and non-security tokens securely. In 2018, it launched its digital assets exchanger, which was initially called Bitcoin Middle East Exchange (BitMeEx) but is now simply known as Emirex. 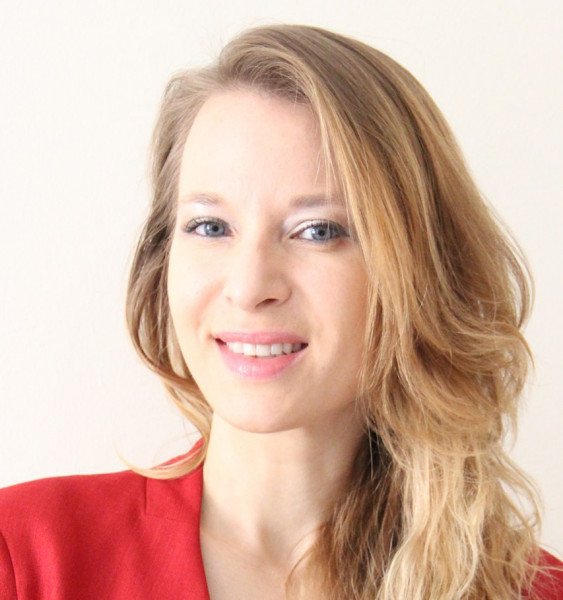 Emirex Co-Founder Irina Heaver, chief strategy officer of the group, has been nominated for “Entrepreneur of the Year” award by Arabian Business

The Ecosystem is built to achieve three core functions. The first is to leverage Blockchain technology to connect a vibrant community of issuers, investors, and traders in the Middle East, Africa, Asia, and Europe. The second function is to democratize access to wealth by enabling the compliant use of digital assets in local banking ecosystems. The third function is to simplify financing for businesses around the world through a revolutionary tokenization model. 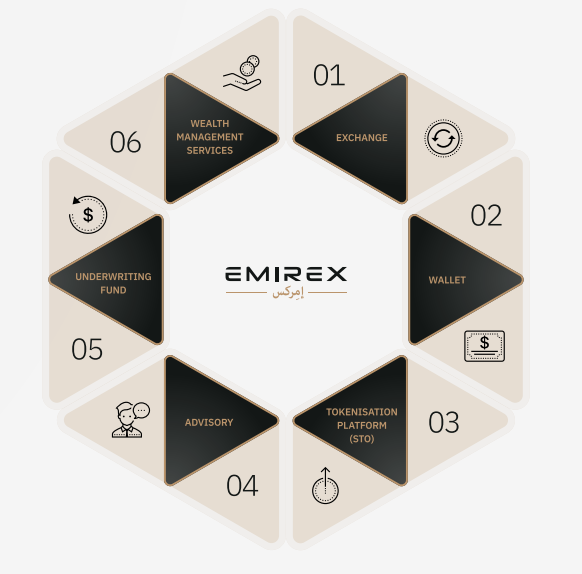 Emirex is focused on delivering the first in its class Digital Commodities Exchange which will be an alternative investment platform focusing on tokenizing the USD$20 trillion a year commodities sector. The exchange will also host the trading of tokenized equity and debt instruments of commodities companies, as well as actual physical commodities, such as precious, industrial & rare earth metals, precious stones, and energy commodities.

They have successfully delivered blockchain-powered corporate bond and tokenised commodities platform and has advised on multiple equity tokenisation projects and now developing a primary issuance platform for tokenised securities and assets.

Emirex has already delivered pilot projects on tokenised corporate bond for a mining project in West Africa and on tokenization of rare earth commodities. The company has also worked with publicly listed precious & industrial metals producing companies on how to tokenize their physical assets.

Beyond private projects such as Emirex, the UAE government is actively embracing Blockchain technology. The Federation of Emirates has publicly committed to completing as much as 50% of government transactions through Blockchain-powered systems by 2021. The Dubai government, working in partnership with IBM and Consensys is engaged in about 20 blockchain projects towards building Smart Dubai, the “world’s smartest and happiest city.”

Sheikh Mohammed bin Rashid Al Maktoum, Vice President and Prime Minister of the UAE, during the launch of the country’s “UAE Blockchain Strategy 2021” observes that “the adoption of this (blockchain) technology will reflect on the quality of life in the UAE and will enhance happiness levels for citizens.”

Last year, Omar bin Sultan Al Olama, Minister of State for artificial intelligence while speaking during the UAE Government Annual Meeting revealed that “the UAE is keen to adopt AI and blockchain technologies in all the economic, health, educational and other vital sectors. It seeks to boost cooperation and forge partnerships…”

Israel is empowering startups to succeed

Analysts at Deloitte have branded Israel as “the hotspot of blockchain innovation” and the branding is apt because high technology accounts for more than 15% of its GDP. Israel has an enviably long list of more than 200 Blockchain startups focused on cybersecurity, military, defense, and healthcare. The launch of the Hogeg Institute for Blockchain Applications by Tel Aviv University in 2018 also strengthens the development of talent to drive innovation with the emerging technology. The proactive participation of the government with developments such as the highly detailed “Interim Report on the Regulation of Decentralized Cryptocurrencies” released by the Israel Securities Authority is also providing regulatory clarity that gives startups the freedom to experiment.

Jordan is solving a humanitarian crisis with blockchain

Jordan’s love for blockchain technology is being fuelled by a socio-humanitarian crisis resulting from the horrors of the war in Syria. More than 100,000 refugees are living in camps in Jordan, many of them don’t have passports or any other forms of identification and the task of catering to them is incredibly daunting.

By leveraging Blockchain technology, Jordan through the United Nations World Food Programme (WFP) has developed a decentralized program called “Building Blocks: Blockchain for Zero Hunger” for the effective distribution of the cash-for-food aid to Syrian refugees.

The program helps the WFP record transactions transparently, provides refugees with identification of sorts, and it also serves as a wallet through which they can be reintegrated into a formal economy.

Iran is one of the most vocal proponents of Blockchain adoption in the Middle East. Earlier this year, the Central Bank of Iran (CBI) unveiled plans to build a national blockchain project called the Borna platform to power its financial services industry. Working with a local blockchain organization called Areatak, the CBI is hoping to accelerate the development of Iran’s banking and financial sectors into a fully digital economy. The Borna Platform is built on IBM’s Hyperledger Fabric Framework and it will ride on Smart Contracts to ensure operational transparency in the country’s finance industry.

This is not an exhaustive compilation of blockchain projects in the Middle East. Other countries such as Bahrain, Egypt, Kuwait, and Oman not profiled in this piece are also actively commissioning projects that will ultimately accelerate the mass-market adoption of blockchain.

Cryptocurrencies are still only a little over 10 years old, they’ll still go through many phases of iteration fuelled by speculative boom and bust cycles. Nonetheless, the use of the underlying Blockchain technology in enterprise and governance solutions in the Middle East might be the catalyst that ends the dismissive disposition of western governments to disruptive technology.

Disclosure: No positions in any of the stocks mentioned in the article.

Is Vista Gold Corp. (VGZ) A Good Stock To Buy?
Monthly Newsletter Strategy
Download a free copy of our newsletter and see the details inside!
Hedge Fund Resource Center
Related News
10 Human Trafficking Stories in America 10 Easiest Instruments For Adults To Learn On Their Own 10 Most Profitable Franchises In The World
Billionaire Hedge Funds