Netflix, Inc. (NFLX): Was “Arrested Development” Worth the Investment?

Netflix, Inc. (NASDAQ:NFLX) shares fell more than 6% on Tuesday, which was the first trading day after the extended Memorial Day weekend — and after Netflix’s debut of Arrested Development, Season 4.

Investors are reacting to a mixed bag of Arrested reviews. The cult hit came into the weekend on a full head of buzz, but not everyone loved the return of the Bluth family. This was supposed to be universally loved, top-shelf material. Anything less feels like missing an earnings estimate. That’s why Netflix shares are back to prices not seen since, oh, about three weeks ago. 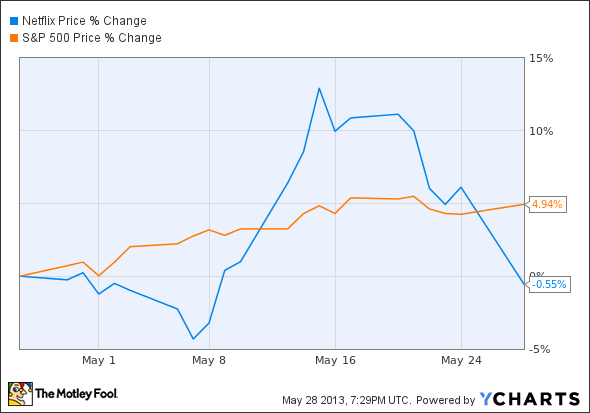 But that didn’t stop Arrested fans from enjoying the new content in droves.

The launch had “a noticeable effect on network traffic” across networks with Netflix customers, according to network analytics specialist Procera. The show accounted for 2% to 7% of all Netflix traffic this weekend, depending on which network you’re looking at. In one extreme case, 36% of the unnamed DSL network’s broadband customers came looking for frozen bananas at some point during the weekend.

To put that last number into context, the most active network around the House of Cards launch saw just 11% of its subscribers catching some of that show in the first weekend, again according to Procera. And HoC was declared a universal success.

So is there any money for Netflix in this famous banana stand? It’s too early to tell. I suspect we’ll get some clues on Thursday, when Chief Content Officer Ted Sarandos is scheduled to speak at analyst firm Nomura’s telecom and media conference. He’ll have to dodge questions like a Olympic-grade dodgeball pro in order not to spill any beans on Arrested Development‘s success (or lack thereof).

In the meantime, let’s consider what metrics Netflix is likely to care about.

A traffic spike in the first week doesn’t mean much. This could be an influx of Bluth fans with one-month free trials in tow, primed for conversion into loyal Netflix customers. Or they could be existing Netflix customers shifting their eyeballs from some other piece of content to Arrested Development for a while. So pure traffic figures aren’t all that important.

Netflix is built on word-of-mouth marketing and voluntary customer loyalty. CEO Reed Hastings is proud of how easy it is to leave the service, for example — no two-year contracts here, you’re supposed to stick around (or come back after canceling) if you like the service. So content quality matters a lot. Critics and consumers don’t always see eye to eye, and even Twitter recaps don’t count as a statistical sample of real-world opinions. Procera might be able to follow up with viewership numbers a few weeks or months down the road, and strong figures there would definitely mean something. Otherwise, we’ll just have to wait for some bread crumbs from Netflix’s management, or significant changes to its subscriber numbers in coming quarters.

And Netflix does aim high with all of its in-house productions. House of Cards and Hemlock Grove are high-quality productions with big names both behind and in front of the camera. Arrested came with a built-in fan base and correspondingly high expectations. The company is likely to bet big on each of its hand-picked projects, which Sarandos recently said might double in 2014 from this year’s four original shows — and perhaps with direct ownership to replace the current licensing model.