How is it that a company with explosive growth can be under pressure to make any sort of profit? That’s the position Netflix, Inc. (NASDAQ:NFLX) is in as a distributor of streaming content, but an owner of very little content itself. 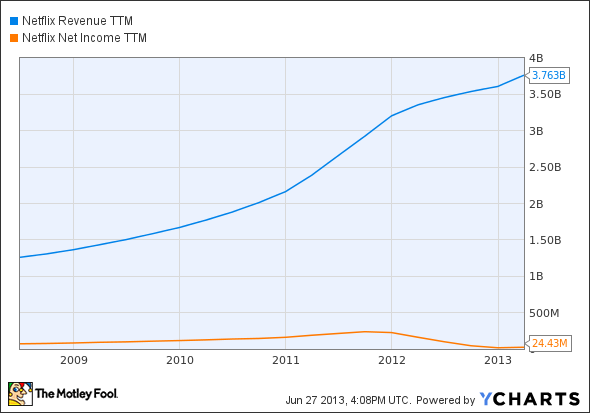 As Amazon.com, Inc. (NASDAQ:AMZN) and Netflix, Inc. (NASDAQ:NFLX) expand, they’ll continue to fight for content, as they’ve done in recent months, and neither will make a significant profit from streaming. But the bigger problem is that neither company has any real competitive advantage in streaming. Content owners still hold all of the valuable assets and, if they’re unhappy with the prices being offered, they can build streaming networks themselves.

It’s a vicious cycle that both Netflix, Inc. (NASDAQ:NFLX) and Amazon are playing. As they add subscribers, content owners demand more money, which brings more subscribers and higher prices for content. There’s never any room left for a profit.

The biggest leverage content owners have is building their own apps and replacing Netflix, Inc. (NASDAQ:NFLX). HBO Go has proven it can be done, and Time Warner is certainly using it as a test ground. The Walt Disney Company (NYSE:DIS)‘s ESPN subsidiary also has a successful app called Watch ESPN, which is now available on most mobile devices and Apple TV. Warner Bros. has even started a streaming service called WB Archive Instant, another content-backed competitor.

I think we’ll only see more of this in the future, particularly as cord cutting becomes a more viable option. Content owners will need a way into your living room, and developing apps is a high margin way to do this.

If Netflix is going to compete with cable and content owners, it will have to build a different business model. The $7.99 all-in-one model simply isn’t going to work forever.

The deal the company signed with The Walt Disney Company (NYSE:DIS) at a reported $300 million per year may be their opportunity to do just that. The content will be new releases, which command a premium in today’s market on Starz. There’s also the possibility that smaller content owners, like CBS, could create mini-channels on Netflix, and leverage the company’s wide distribution network.

The bottom line is, for Netflix to survive, it’s going to have to adapt to content owners creating their own distribution networks. That will require a flexible business model, something Reed Hastings has resisted to this point.