Netflix reported fourth quarter earnings after the close on Wednesday that surpassed analyst expectations and their own estimates and sent shares soaring over 9% in the post market session. The subscription service company announced earnings per share of 15 cents on $66.7 million in net income compared to the same period last year where they earned $43.2 million or 10 cents per share. Revenues also topped expectations coming in at $2.48 billion compared to $1.82 billion for the fourth quarter last year. Analysts were looking for 13 cents per share on $2.47 billion in revenue.

However, what was most impressive and what I think really got investors excited was how much they grew by. Netflix went after foreign markets in 2016, which may have been one of their best decisions as they posted 7.05 million new subscribers (5.12 million from international subscribers) in the fourth quarter alone blowing past their estimates of 5.2 million. They “only” grew by 3.57 million new subscribers in the third quarter.

Most of this growth is due to their expansion overseas along with how well their original content has been received. Names like Stranger Things, Narcos, and The OA have attracted more subscribers and as a result of their original content success they will be increasing their budget to $6 billion, from $5 billion in 2016, to increase the amount of original content they will put out. This was an excellent way for Netflix to close out the year and a pleasant surprise for investors. 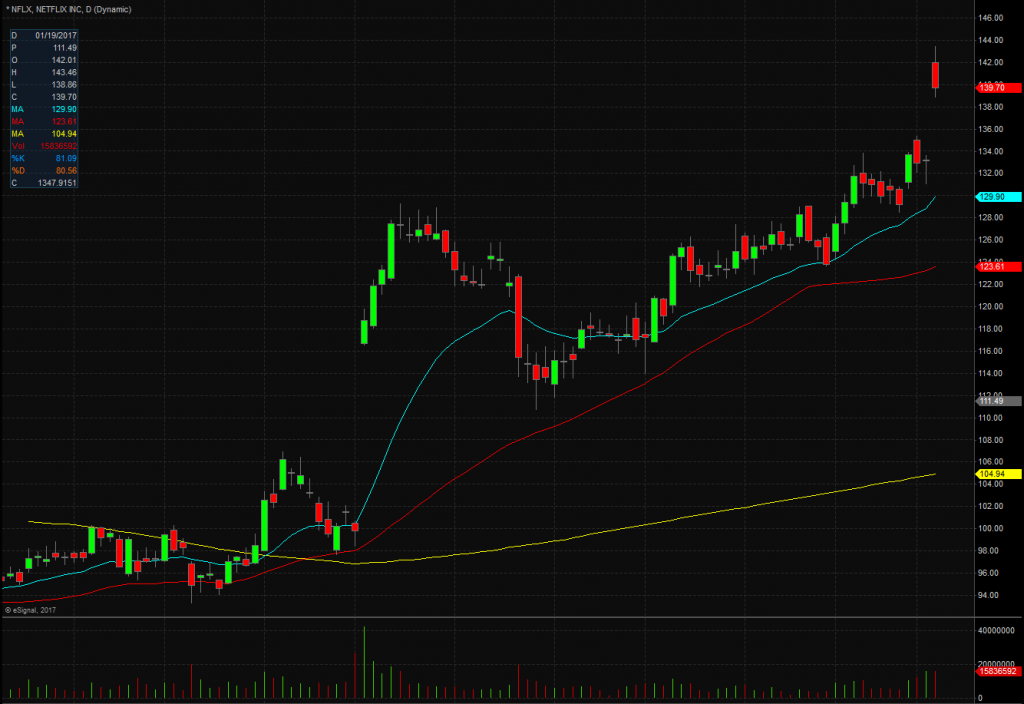 Looking at the daily chart above you will see that shares had a nice gap up following the earnings release but were topped out at $146 before retreating to an opening print of $142.01. Shares have pulled in a little since the open as i’m sure a lot of longs were taking profits on the huge gap up. However, I would like to see shares hold around the $140 level and start to consolidate for another move up over the coming days. Look for support to come in at $140, $139 and at $135.40. Since the stock is in new territory we will have to assume that big round numbers will provide resistance like $150. Currently analysts have an average price target of $128.49 but we will likely see that upgraded over the coming days. 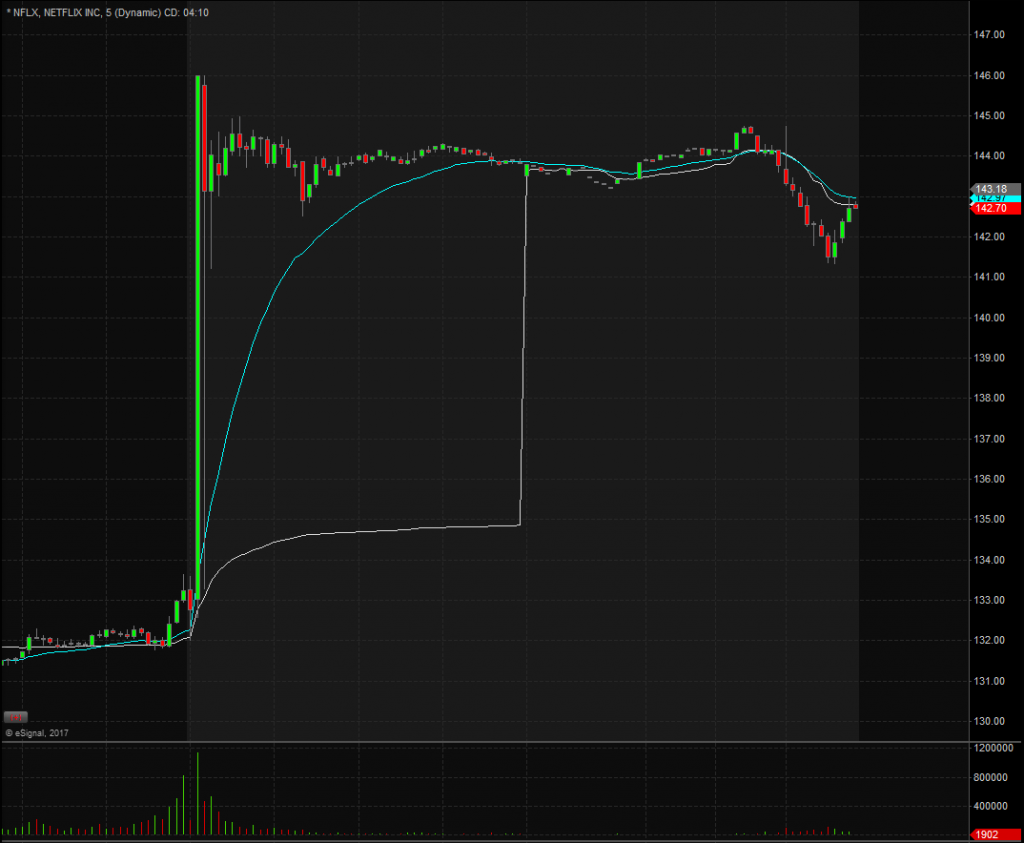 Looking at the 5-minute chart above, shares ran into a brick wall at $146 where it was stopped in its tracks after surging up 9.5% from Tuesday’s close at $133.26. Netflix, Inc. (NASDAQ:NFLX) had a similar pop like this on its third quarter results but was able to keep it going in the following days. Expect shares to have an increase in volume and volatility as investors and analyst soak in the news and make their investing decisions. This will also provide plenty of opportunities for active traders to take advantage of and will be on most traders radars.

Overall, this was a excellent earnings quarter for Netflix, Inc. (NASDAQ:NFLX) and should spark plenty of interest coming into 2017. They topped analyst expectations and their own guidance numbers with stronger than expected growth. I’m really excited to the new content they are going to put out and how their customers are going to react to it.

“This quarter marks the 10-year anniversary of our launch of streaming,” CEO Reed Hastings said in a letter to shareholders. “The next decade will be even more amazing and tumultuous as internet TV supplants linear TV, and as we strive to remain a leader.”

Subscriber growth is a key metric for this type of company and now that they are venturing out into new markets with a better understanding of what kind of content their subscribers want, they will be in prime position to continue this strong growth. Keep this stock on your radar for 2017 as it is likely to be a strong performer.

About the Author: Ross

Ross Cameron a full time day trader and is the owner of Warrior Trading (https://www.warriortrading.com). At Warrior Trading Ross hosts a Day Trading Chat Room and teaches Day Trading Courses to beginner and even advanced traders. Over the years he has offered day trading webinars and seminars for many large companies including eSignal, Trade-Ideas, Lightspeed Financial, and Speedtrader. In 2016 Ross was nominated for a Benzinga Fintech award for Best Educator. You can also follow him on twitter @daytradewarrior.