Carl Icahn can’t seem to stay out of the headlines. The one-time Netflix, Inc. (NASDAQ:NFLX) agitator and mortal enemy of fund manager Bill Ackman is now knee-deep in what has become a low-grade bidding war for Dell Inc. (NASDAQ:DELL).

I’m mystified, though, as to why Icahn or anyone else would want a piece of the PC maker. Dell is missing out on the greatest growth opportunity we’ve seen in more than a decade.

Tablet troubles
Some won’t agree with that take, especially those who say that tablets are, in effect, PCs. They’re the just the new “form factor” — what the computer has morphed to be, these cheerleaders say, arguing that an uptick in tablet sales favors Microsoft Corporation (NASDAQ:MSFT) and Intel Corporation (NASDAQ:INTC) at least as much as Apple Inc. (NASDAQ:AAPL) and Google Inc (NASDAQ:GOOG).

If the categories really were so indistinct, then Dell would have no reason to sell itself to the highest bidder. Just sit back and roll in the giant piles of cash built from sales of the XPS 10 tablet and the relatively new XPS 12 convertible, which earns good reviews from the likes of CNET and Engadget. These are the sorts of Windows 8 devices that will  boost the whole PC sector, right?

PC fumbles
Wrong. Manufacturers haven’t seen a boost of any kind. Intel Corporation (NASDAQ:INTC)’s first-quarter guidance came in below consensus due to weak PC demand. Microsoft reported good Q4 results in its Windows division, but on a comparative basis, Windows 8’s launch quarter brought in about $1 billion less than Windows 7 did at the time of its introduction. Taiwanese manufacturer Acer recently said Chromebook sales are on the rise while characterizing Windows 8 as “still not successful.”

Dell, too, is showing battle scars. The one-time PC king suffered an 11% decline in revenue and a 22% drop in adjusted earnings per share in Q4. Both figures nudged ahead of estimates, revealing just how pessimistic Wall Street’s view is of this business.

Analysts have good reason to be wary. Q4’s results continue a downward pattern that’s been in place for years and that shows no signs of abating: 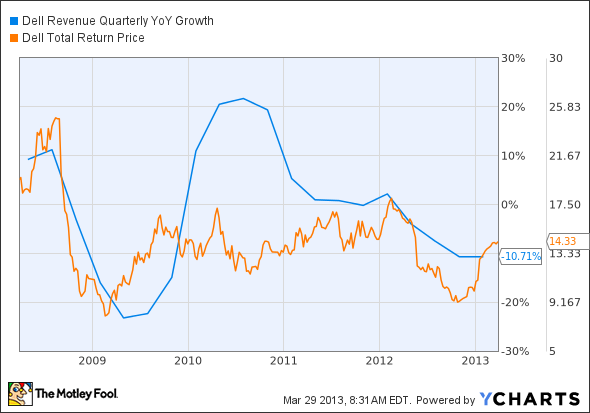 Tabbed out
In its 10-K annual report, Dell Inc. (NASDAQ:DELL) cites the “mobility” business as one of its weakest. Sector revenue declined 20% on an 18% drop in units sold. Average selling prices also fell 2%.