Netflix, Inc. (NFLX) Gets a Bizarre “Like” From Royal Bank of Canada (USA) (RY)

On Tuesday, RBC analyst Mark Mahaney resumed coverage of Netflix, Inc. (NASDAQ:NFLX) with a buy rating and a $210 price target. While many investors have become bullish on Netflix recently, Mahaney’s decision to place a buy rating on the stock was odd for two reasons. Most obviously, he’s a little late. Netflix, Inc. (NASDAQ:NFLX) shares have already more than tripled in the past six months! While Mahaney sees another 15% upside, investors who have been waiting on his call missed the real party. 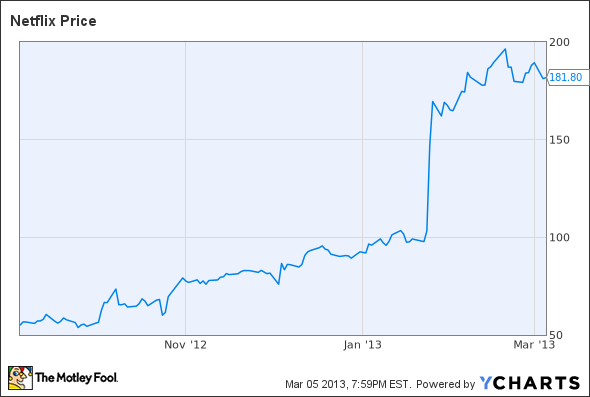 However, the rating was also bizarre because the underlying analysis was not very bullish. Mahaney expects the domestic subscriber base to continue growing, but only at a moderate rate. Meanwhile, he expects the international business to lose money for at least two more years. With these parameters, Netflix, Inc. (NASDAQ:NFLX) looks more like a sell.

Slow subscriber growth
In an interview on CNBC on Tuesday, Mahaney stated that Netflix, Inc. (NASDAQ:NFLX) could continue to add around 5 million domestic subscribers per year for the next few years. The main growth driver, in his opinion, is the ongoing shift of video consumption from TV to the Internet. In his research note, Mahaney pinned down his growth expectation further, predicting 39 million domestic streaming subscribers by 2015.

This implies an approximately 15% CAGR in subscriber numbers (and domestic streaming revenue, assuming no price increases), depending on exactly when in 2015 Netflix hits 39 million subscribers. By contrast, Netflix grew its domestic subscriber base by 25% in 2012, and “real” Netflix, Inc. (NASDAQ:NFLX) bulls like my fellow Fool Anders Bylund expect growth to remain above 20% for at least the next few years.

The upshot
I think Mahaney’s subscriber growth estimates are probably on target. Competition from Amazon.com, Inc. (NASDAQ:AMZN) , which seems willing to run its Prime Instant Video service at a loss, will intensify over the next year or two. Furthermore, the streaming service has high churn: Netflix has thrown out numbers like 5% per month previously. As the subscriber base increases, it becomes harder to offset that churn: If churn is still 5%, that means that 1.35 million Netflix users are canceling every month. Even if Netflix’s investments in original and exclusive content eventually reduce churn to 3%, that still becomes a big drag as the subscriber count approaches 40 million or 50 million.