On Tuesday, Netflix, Inc. (NASDAQ:NFLX) stock finally broke through the $300 barrier to set a new all-time high around $313. A variety of factors have sent Netflix shares soaring by nearly 500% over the last 12 months. 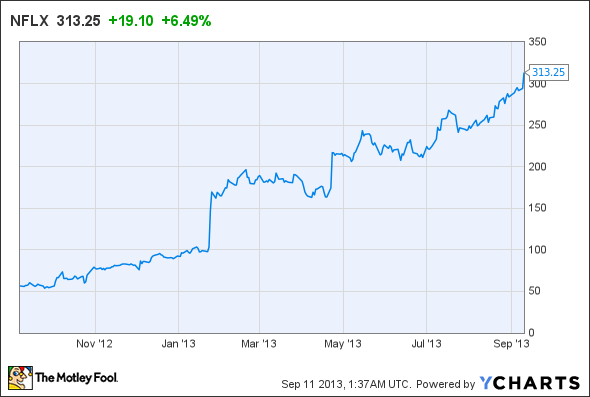 However, two major types of catalysts have been paramount. First, strong improvements in the company’s domestic streaming contribution margin has helped Netflix, Inc. (NASDAQ:NFLX) repeatedly beat earnings estimates (excluding a onetime refinancing charge in Q1 of 2013 ). Second, a variety of new content “events” have convinced observers that Netflix is rapidly improving the quality of its content offerings.

What Netflix, Inc. (NASDAQ:NFLX) investors don’t seem to understand is that these two types of catalysts are mutually exclusive over the long term. High-quality content is expensive. High-quality original content is even more so. For the most part, the new content Netflix has been announcing has not been paid for (at least in Netflix’s income statement).

This has allowed Netflix, Inc. (NASDAQ:NFLX) to make dramatic announcements related to new content without experiencing an associated margin hit. Longer term, this will not be possible. As Netflix is forced to choose between more dramatic content additions and growing the bottom line, I expect the stock to give up most of its 2013 gains.

Big content deals, but not for now
Arguably the biggest new content deal announced by Netflix, Inc. (NASDAQ:NFLX) in the past year was an agreement with The Walt Disney Company (NYSE:DIS) announced last December. Beginning in 2016, Netflix will be the exclusive subscription video home for Disney feature films.

The news sent Netflix, Inc. (NASDAQ:NFLX) shares soaring by 14%. However, terms of the deal were not disclosed. In fact, some analysts believe the deal will cost Netflix $350 million per year. However, investors don’t have to deal with that unsavory part of the equation yet; those costs will not hit Netflix’s income statement until the Disney films start to become available a few years down the road.

Just last month, Netflix, Inc. (NASDAQ:NFLX) announced another movie deal that will begin in 2016, this time with The Weinstein Company. News of this deal boosted Netflix stock by 5% from a much higher base — in nominal terms, the move was similar in scale to the “Disney effect.” 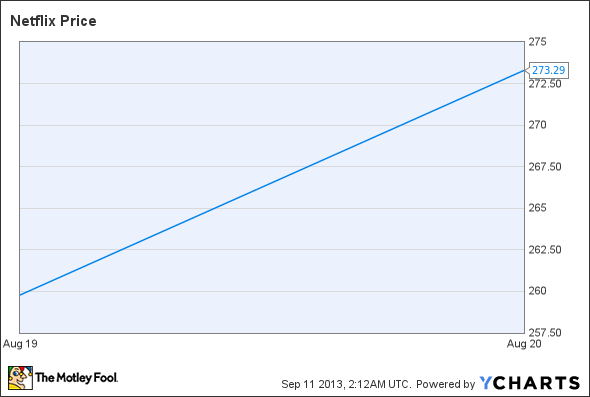 Netflix shares jumped after it announced a deal with The Weinstein Company last month (data by YCharts).

Netflix, Inc. (NASDAQ:NFLX) also benefited from the announcement of a major deal for 300 hours of original animated content from DreamWorks Animation Skg Inc (NASDAQ:DWA) in June. This news helped boost Netflix shares 7% in one day. Investors apparently believed that the DreamWorks content would be a suitable replacement for a variety of children’s content from Viacom, Inc. (NASDAQ:VIAB) that Amazon.com, Inc. (NASDAQ:AMZN) won away from Netflix.

There’s one common thread tying all of these content deals together. None of them has begun yet, and therefore they have had no impact on Netflix, Inc. (NASDAQ:NFLX)’s financial statements. When it has to start accounting for these additional content expenses, it will dramatically slow — or reverse — the company’s earnings growth. Indeed, Netflix has directly signaled that its domestic streaming margins have been growing at an unsustainably high rate recently.

Cash or plastic?
Original content has been another area where Netflix, Inc. (NASDAQ:NFLX) has gotten a lot of “bang for the buck” this year because most of the costs have been deferred to future years. Netflix has elected to amortize the cost of most of its original series on a straight-line basis over a four-year period. This allows it to spread the cost of expensive original series over many quarters.

However, given the “binge viewing” behavior that Netflix, Inc. (NASDAQ:NFLX)’s release schedule encourages, it seems very likely that viewing of most Netflix Originals peaks soon after release. If that is the case, Netflix will have to change its accounting method to absorb more of the accounting cost in the quarter when new original content is released (and when most viewing is occurring).

For example, Netflix, Inc. (NASDAQ:NFLX) is believed to have spent $50 million per season for House of Cards. The first season was released on February 1, meaning that it was available for two months in Q1. With the $50 million cost being split evenly over 48 months, the accounting cost of House of Cards was $2.08 million in Q1.

However, given the buzz around the series’ release, viewing in February and March was probably a lot higher than today. In all likelihood, people will spend even less time watching Season 1 of House of Cards in 2016. If 30% of the expected “lifetime” viewing occurred in Q1 of this year, then 30% of the total cost (i.e., $15 million) should also be attributed to Q1.