Revitalizing a nation is like trying to redirect an aircraft carrier; it can be done, but it is a long process. Mexico has a large population over 100 million and a growing economy. If it can manage to grow its middle class and move its level of inequality closer to European levels, then consumer goods firms will benefit from increased purchasing power. Grupo Televisa SAB (ADR) (NYSE:TV). is a power player in the Mexican cable and telecom market. The company benefits from an impressive Spanish language content portfolio and agrowing interestin the English-speaking U.S. market. 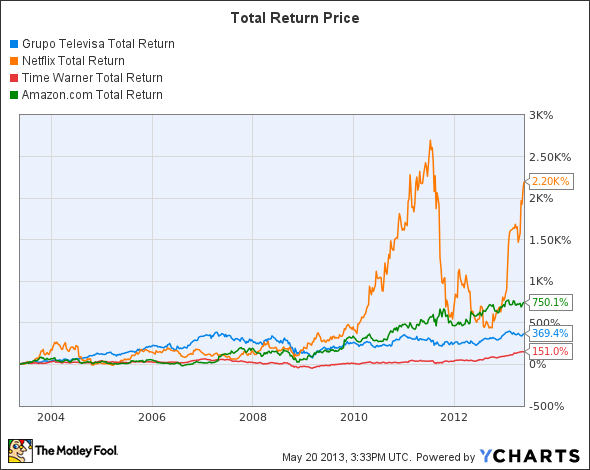 Capitalism moves in cycles and if society is not careful, monopolies can keep growing and charge consumers excessive prices. Mexico recently introduced legislative reform to bring more competition into the Mexican telecom and media sector. This will have a negative impact on some of Televisa’s operations, but it will also drive the firm to innovate and grow.

Televisa does have some hedges against changing Mexican legislation. A number of the company’s divisions have substantial operations outside of Mexico. In the first quarter of 2013 around 64% of the publishing division came from outside Mexico.

Within the world of online video, content owners have the upper hand. They are very influential in setting licensing rates. Televisa’s strong telenovela portfolio gives it an upper hand among companies that stream content for Latin consumers.

With Grupo Televisa SAB (ADR) (NYSE:TV)‘s move into the English-speaking U.S. market, it has come into closer competition with Time Warner Inc (NYSE:TWX). Time Warner is a very strong competitor with a substantial content portfolio. Its HBO division produces the popular Game of Thrones series. Time Warner Inc (NYSE:TWX) is looking to spinoff its publishing arm to help it to focus on the more profitable T.V. and media operations.

Time Warner Inc (NYSE:TWX)’s earnings before interest and taxes (EBIT) margin of 20.7% and return on investment (ROI) of 7.6% are lower than Grupo Televisa SAB (ADR) (NYSE:TV)’s respective EBIT margin of 25.9% and ROI of 8.0%. In the short term, the spinoff of Time Warner’s publishing division and the implementation of Mexico’s telecom reform law will probably boost Time Warner’s numbers and decrease Televisa’s numbers. Regardless, Televisa’s five year revenue growth rate of 7.4% and Time Warner’s five year revenue growth rate of -9.2% show that Televisa is on the right side of U.S. demographic changes and Mexico’s economic growth.