During the first half of the fourth quarter the Russell 2000 ETF (IWM) lagged the larger S&P 500 ETF (SPY) by about 4 percentage points as investors worried over the possible ramifications of rising interest rates. The hedge funds and institutional investors we track typically invest more in smaller-cap stocks than an average investor (i.e. only 298 S&P 500 constituents were among the 500 most popular stocks among hedge funds), and we have seen data that shows those funds paring back their overall exposure. Those funds cutting positions in small-caps is one reason why volatility has increased. In the following paragraphs, we take a closer look at what hedge funds and prominent investors think of NeoGenomics, Inc. (NASDAQ:NEO) and see how the stock is affected by the recent hedge fund activity.

NeoGenomics, Inc. (NASDAQ:NEO) has seen an increase in activity from the world’s largest hedge funds lately. Our calculations also showed that neo isn’t among the 30 most popular stocks among hedge funds.

According to most market participants, hedge funds are seen as underperforming, old financial vehicles of the past. While there are more than 8,000 funds in operation at present, Our researchers choose to focus on the elite of this club, about 700 funds. It is estimated that this group of investors oversee the majority of the smart money’s total asset base, and by keeping track of their inimitable investments, Insider Monkey has deciphered numerous investment strategies that have historically outstripped the S&P 500 index. Insider Monkey’s flagship hedge fund strategy defeated the S&P 500 index by 6 percentage points annually since its inception in May 2014 through early November 2018. We were able to generate large returns even by identifying short candidates. Our portfolio of short stocks lost 24% since February 2017 (through December 3rd) even though the market was up nearly 23% during the same period. We just shared a list of 11 short targets in our latest quarterly update.

How have hedgies been trading NeoGenomics, Inc. (NASDAQ:NEO)? 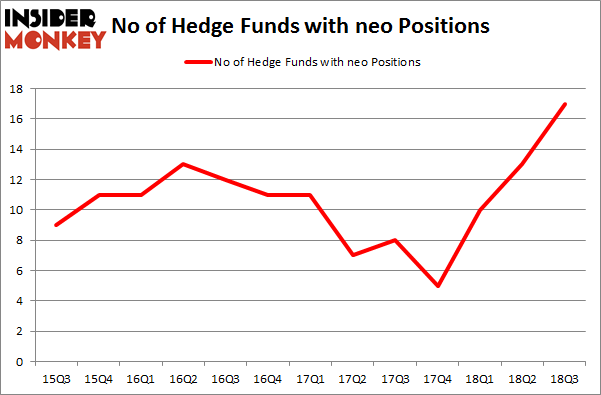 When looking at the institutional investors followed by Insider Monkey, Citadel Investment Group, managed by Ken Griffin, holds the biggest position in NeoGenomics, Inc. (NASDAQ:NEO). Citadel Investment Group has a $6.3 million position in the stock, comprising less than 0.1%% of its 13F portfolio. On Citadel Investment Group’s heels is Chuck Royce of Royce & Associates, with a $5 million position; less than 0.1%% of its 13F portfolio is allocated to the company. Remaining peers that hold long positions comprise Peter Rathjens, Bruce Clarke and John Campbell’s Arrowstreet Capital, Mario Gabelli’s GAMCO Investors and Jim Simons’s Renaissance Technologies.

With a general bullishness amongst the heavyweights, some big names have jumped into NeoGenomics, Inc. (NASDAQ:NEO) headfirst. Renaissance Technologies, managed by Jim Simons, created the most outsized position in NeoGenomics, Inc. (NASDAQ:NEO). Renaissance Technologies had $2.7 million invested in the company at the end of the quarter. Matthew Hulsizer’s PEAK6 Capital Management also initiated a $0.7 million position during the quarter. The following funds were also among the new NEO investors: Andrew Feldstein and Stephen Siderow’s Blue Mountain Capital, Steve Cohen’s Point72 Asset Management, and Roger Ibbotson’s Zebra Capital Management.

As you can see these stocks had an average of 14.75 hedge funds with bullish positions and the average amount invested in these stocks was $97 million. That figure was $27 million in NEO’s case. PGT Innovations Inc. (NYSE:PGTI) is the most popular stock in this table. On the other hand Accelerate Diagnostics Inc (NASDAQ:AXDX) is the least popular one with only 6 bullish hedge fund positions. NeoGenomics, Inc. (NASDAQ:NEO) is not the most popular stock in this group but hedge fund interest is still above average. This is a slightly positive signal but we’d rather spend our time researching stocks that hedge funds are piling on. In this regard PGTI might be a better candidate to consider a long position.