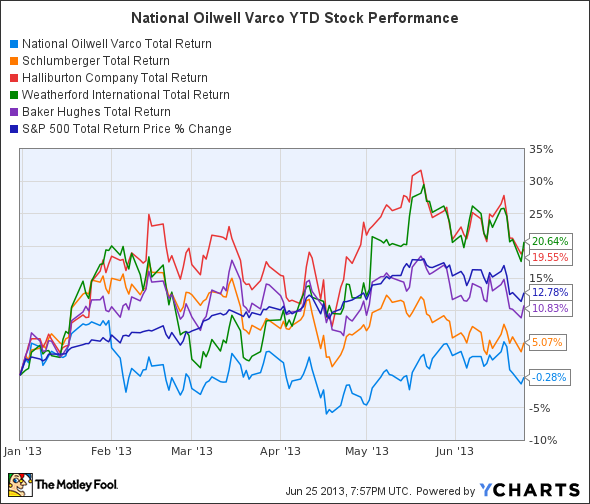 Zacks’ bear argument is 100% correct in its assessment that National-Oilwell Varco, Inc. (NYSE:NOV)’s Q1 2013 earnings fell below analyst expectations. Everyone expected a weak quarter, but the final results were simply worse than expected. This disappointment caused many analysts to lower earnings expectations for the rest of 2013; these analysts have taken the view that the sequential decline in gross margin from 24.8% to 24.3% is a trend that will continue for the company.

Despite the lackluster Q1 results, there have been several positive developments for National-Oilwell Varco, Inc. (NYSE:NOV) investors thus far in 2013.  Here are a few:

Q1 revenue grew 23% year-over-year. This revenue increase was highlighted by a 16% increase in Rig Technology (the company’s largest segment) and a 118% increase in Distribution and Transmission (thanks in large part to the successful integration of acquisitions made during 2012).

Similarly, backlog in the company’s Rig Technology segment increased 8% sequentially and 24% year-over-year to a record $12.9 billion. This backlog figure is a strong indicator that robust growth will continue for National-Oilwell Varco, Inc. (NYSE:NOV) for the foreseeable future.

National Oilwell Varco closed its $2.5 billion acquisition of Robbins & Meyers in late February. Based on the company’s long track record of successful integration of acquisitions to supplement organic growth, there is no reason to think that this success won’t continue with this acquisition as well as those completed in the future.

In an expression of confidence in the strength of the company’s cash flow, management announced that it will double its quarterly dividend payment to $0.26 per share beginning with the dividend paid earlier this month. This represents a yield of 1.5% and demonstrates the company’s willingness to increase its dividend faster than the $0.01 increase in the quarterly dividend each year since the dividend began at $0.10 per share in 2010.

The valuation is fantastic

With a trailing price to earnings ratio of 12 and an expected growth rate of 14%, National Oilwell Varco is trading at a PEG ratio of just 0.8. Here is how this attractive PEG ratio compares to alternative investment ideas in the oilfield services industry: