Microsoft Corporation (NASDAQ:MSFT) and Amazon.com, Inc. (NASDAQ:AMZN) and other big companies have helped buoy the NASDAQ to a new high, Julie Hyman tells Betty Liu in a discussion on Bloomberg’s In The Loop.

According to the Bloomberg senior markets correspondent, the new record for the NASDAQ yesterday trailing the other major averages was in no small part because of companies such as Microsoft Corporation (NASDAQ:MSFT) and Amazon.com, Inc. (NASDAQ:AMZN) reporting earnings that pleased industry observers and investors.

Hyman first discussed Microsoft Corporation (NASDAQ:MSFT) which she says is having its best day since August of 2013 because of a substantial 6% intraday gain. This is also the highest the stock has been in about three months, the Bloomberg correspondent tells Liu.

The company is selling more expensive versions of its server programs, Hyman also says, while its commercial cloud revenue more than doubled for the seventh straight quarter. That is in contrast to last quarter where Microsoft did do so well, she says, so this quarter has reassured investors.

As for Amazon.com, Inc. (NASDAQ:AMZN), the company is “also helping to support the NASDAQ,” Hyman says. The stock is trading at an all-time high with that 14% intraday gain, she tells Liu. Hyman also notes that this is the company’s best one-day gain in three months.

During its latest quarterly report, Amazon.com, Inc. (NASDAQ:AMZN) sales were reported to be up 15%. The firm also revealed for the first time ever its data for its web services division. Sales for Amazon Web Services (AWS) was up 49% to $1.57 billion, Hyman notes. The health of AWS has pleasantly surprised other analysts. 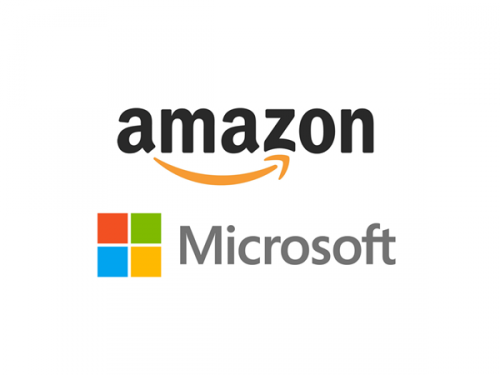