Are potash producers a profitable pick for your portfolio? Let’s take a look.

In the potash industry, there are two cartels: the Belarus Potash Company, made up of Uralkali and Belaruskali, and Canpotex, made up of Mosaic Co (NYSE:MOS), Potash Corp./Saskatchewan (USA) (NYSE:POT), and Agrium Inc. (USA) (NYSE:AGU). Together, these cartels controlled 70% of the potash market. But now, for a number of potential reasons, Uralkali is quitting the cartel. Speculation ranges from the move being a negotiating tactic for a more favorable agreement with its partner Belaruskali, to Uralkali believing the potash market is out of whack and this move is to grab share and push quantity at lower prices. Analysts see potash falling to $300 per ton, down 25% from current prices.

Of course, over the course of history, even $300 is high: 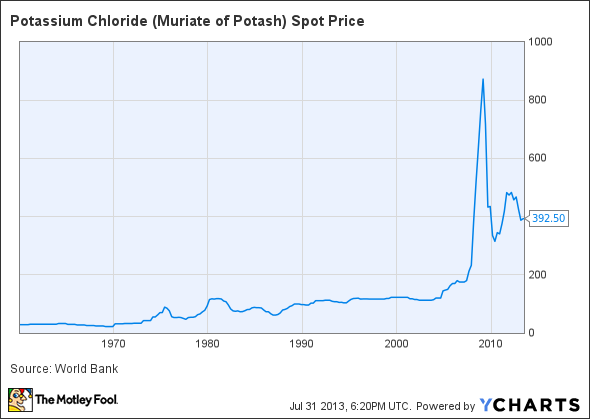 Analysts make their valuations based on future prices, and a fall back to $300 was a surprise to most investors, causing PotashCorp and Mosaic Co (NYSE:MOS)’s stock prices to fall nearly 20%. It also dragged down related companies’ stocks, such as Sociedad Quimica y Minera (ADR) (NYSE:SQM), which only has 3% of the potash market but makes 25% of its revenue on the commodity, by a similar percent.

The future of potash
Will these stocks spring back like the crops they help fertilize? This depends on, obviously, the future price of potash.

If Uralkali follows through and trades outside of the cartel, there’s little other companies can do but match lower prices. This could mean delayed investments in increased production, cost cutting, further consolidation, and cuts in dividends. Expansion projects, like Agrium Inc. (USA) (NYSE:AGU)’s $1.5 billion investment in an extra 1 million tons of capacity scheduled to be completed in 2014, likely won’t meet the return on investment targets when the company first calculated potential profits. Potash prices will likely stay above the average $100 per ton cost of production, but pricing power may never be as strong for the producers as it once was under the cartels. And market sentiment for the companies may take awhile to turn around.