Moody’s Corporation (MCO): Are Hedge Funds Right About This Stock?

The latest 13F reporting period has come and gone, and Insider Monkey is again at the forefront when it comes to making use of this gold mine of data. We have processed the filings of the more than 700 world-class investment firms that we track and now have access to the collective wisdom contained in these filings, which are based on their September 30 holdings, data that is available nowhere else. Should you consider Moody’s Corporation (NYSE:MCO) for your portfolio? We’ll look to this invaluable collective wisdom for the answer.

Moody’s Corporation (NYSE:MCO) investors should pay attention to an increase in enthusiasm from smart money of late. MCO was in 35 hedge funds’ portfolios at the end of September. There were 30 hedge funds in our database with MCO positions at the end of the previous quarter. Our calculations also showed that mco isn’t among the 30 most popular stocks among hedge funds.

How have hedgies been trading Moody’s Corporation (NYSE:MCO)? 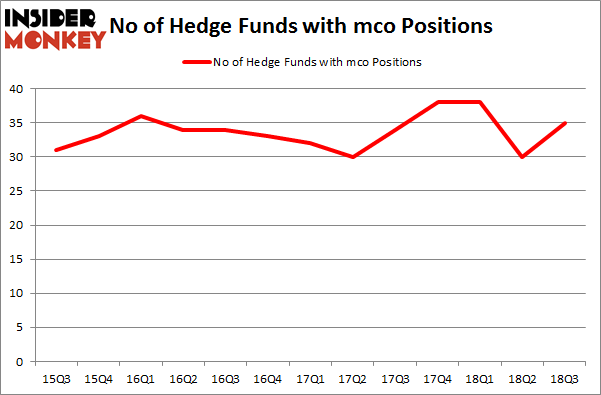 When looking at the institutional investors followed by Insider Monkey, Berkshire Hathaway, managed by Warren Buffett, holds the biggest position in Moody’s Corporation (NYSE:MCO). Berkshire Hathaway has a $4.1248 billion position in the stock, comprising 1.9% of its 13F portfolio. Sitting at the No. 2 spot is Charles Akre of Akre Capital Management, with a $950 million position; 11.1% of its 13F portfolio is allocated to the company. Some other professional money managers that hold long positions include Mark Massey’s AltaRock Partners, and Israel Englander’s Millennium Management.

Now, key money managers were breaking ground themselves. Point72 Asset Management, managed by Steve Cohen, established the most valuable call position in Moody’s Corporation (NYSE:MCO). Point72 Asset Management had $156.3 million invested in the company at the end of the quarter. Paul Marshall and Ian Wace’s Marshall Wace LLP also made a $28.1 million investment in the stock during the quarter. The other funds with new positions in the stock are Israel Englander’s Millennium Management, Dmitry Balyasny’s Balyasny Asset Management, and Robert Joseph Caruso’s Select Equity Group.

As you can see these stocks had an average of 37.25 hedge funds with bullish positions and the average amount invested in these stocks was $1.59 billion. That figure was $5.87 billion in MCO’s case. Worldpay, Inc. (NYSE:WP) is the most popular stock in this table. On the other hand Thomson Reuters Corporation (NYSE:TRI) is the least popular one with only 24 bullish hedge fund positions. Moody’s Corporation (NYSE:MCO) is not the least popular stock in this group but hedge fund interest is still below average. This is a slightly negative signal and we’d rather spend our time researching stocks that hedge funds are piling on. In this regard WP might be a better candidate to consider a long position.

Here is What Hedge Funds Think About Nielsen Holdings plc (NLSN)
Monthly Newsletter Strategy
Download a free copy of our newsletter and see the details inside!
Hedge Fund Resource Center
Related News
4 Stocks Insiders and Warren Buffett Are Crazy About AltaRock Partners 13F: Scott Bradford and Mark Massey Value These Stocks Two Wide Moat Dividend Stocks To Consider On Dips Is Moody’s Corporation (MCO) A Good Stock To Buy? Was KG Funds Management Right About Visa Inc (V), Mastercard Inc (MA), & Two Other Stocks? Why Mastercard Inc (MA), Visa Inc (V), And More Should Have Your Attention Why Investors Are Buzzing about BlackBerry, IBM, Deutsche Bank, and Others The 10 Best Islands to Visit in 2019 5 Most Socially Responsible Companies in America 5 Ways You Can Eliminate Credit Card Debt
Billionaire Hedge Funds