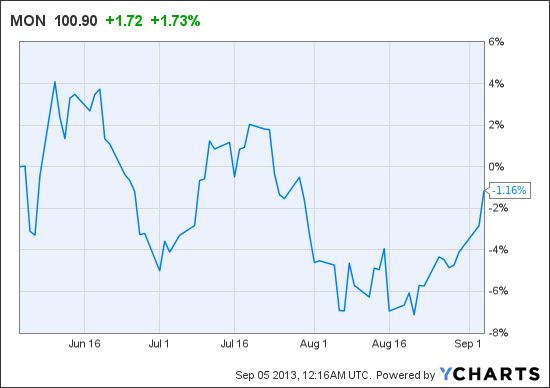 A great story behind the stock
For the past 10 years, Monsanto Company (NYSE:MON) managed to grow its revenue base moderately. This could change if Monsanto Company (NYSE:MON) manages to get its GM crops approved by most world legislatures. Considering how controversial GM crops remain in the minds of most citizens and politicians, is this possible? Well, maybe not in the short run, but the long run shows several hopeful trends for the company.

According to a recent study, if the world is to grow enough food for the projected global population in 2050 — 9.6 billion people — agricultural productivity would need to rise by at least 60%. Currently, productivity of corn, rice, wheat, and soybean crops is increasing 0.9% to 1.6% every year. Furthermore, in some countries (such as in Eastern Europe), crop yields are actually decreasing. At the same time, the cost of food keeps rising globally. And looking at the global market for corn, Monsanto Company (NYSE:MON) argues that demand growth has by far outpaced supply.

Who can solve this problem?
Monsanto’s yield-improving technologies and GM seeds may be the answer. It owns a massive germplasm bank across six continents, and would be more than happy to sell GM seeds to most farmers in the world, if that becomes legally possible. It already has a strong presence in the Americas, with more than 150 million hybrid planted acres so far. According to Morningstar, roughly 90% of the soybeans and 80% of the corn grown in the U.S. contain a Monsanto trait .