Box Inc (NYSE:BOX), QUALCOMM, Inc. (NASDAQ:QCOM) and GrubHub Inc (NYSE:GRUB) were among the early movers on Monday after the stocks received upgrades or downgrades from analysts. Morgan Stanley (NYSE:MS) has upgraded QUALCOMM, Inc. (NASDAQ:QCOM) to an ‘Overweight’ rating. Morgan Stanley cited the cost cutting efforts and new product releases from QUALCOMM, Inc. (NASDAQ:QCOM) as the major influences behind its upgrade. Qualcomm’s stock has gained around 1% so far today. Pacific Crest has upgraded Box Inc (NYSE:BOX) to an ‘Overweight’ rating, pointing at the latest partnerships and big customers of the firm as major reasons behind its upgrade. Following this upgrade, Box’s stock is currently trading at around 2.5% higher than the closing price on Friday. On the contrary, Cowen downgraded GrubHub Inc (NYSE:GRUB) to a ‘Market Perform’ from an ‘Outperform’ rating. Cowen pointed at the possibility of GrubHub losing its first mover advantage to competitors due to an influx of capital for its competitors. GrubHub’s stock is currently trading around 8% lower in trading today. 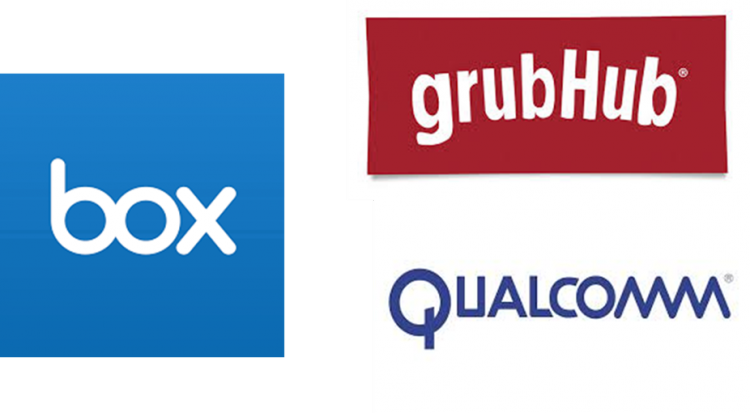 Did the smart money have the same opinion on these stocks as analysts? Before going into the hedge fund activity on Box Inc (NYSE:BOX), QUALCOMM, Inc. (NASDAQ:QCOM), and GrubHub Inc (NYSE:GRUB), we need to understand why Insider Monkey is interested in tracking hedge fund moves in stocks.

Most investors can’t outperform the stock market by individually picking stocks because stock returns aren’t evenly distributed. A randomly picked stock has only a 35% to 45% chance (depending on the investment horizon) to outperform the market. There are a few exceptions, one of which is when it comes to purchases made by corporate insiders. Academic research has shown that certain insider purchases historically outperformed the market by an average of seven percentage points per year. This effect is more pronounced in small-cap stocks. Another exception is the small-cap stock picks of hedge funds. Our research has shown that the 15 most popular small-cap stocks among hedge funds outperformed the market by nearly a percentage point per month between 1999 and 2012. We have been forward testing the performance of these stock picks since the end of August 2012 and they have returned more than 139% over the ensuing 34 months, outperforming the S&P 500 Index by 81 percentage points (read the details here). The trick is focusing only on the best small-cap stock picks of funds, not their large-cap stock picks which are extensively covered by analysts and followed by almost everybody.