Despite production volume records and beating analyst expectations for five straight quarters, Occidental Petroleum Corporation (NYSE:OXY) sure hasn’t seen a lot of love lately from investors. With so many other companies in the integrated oil and gas space making big moves to spin off their midstream and refining operations, perhaps investors are waiting for a similar shakeup to unlock shareholder value.

In the company’s most recent conference call, Occidental CEO Stephen Chazen was asked if management was considering a similar option. While he said that they have considered the idea, they do not believe it is the best path for the company. Let’s take a look why this is the case.

Bucking the spinoff trend
Of all the news that has come out of the oil and gas space in the past couple of years, the performance of some integrated oil and gas players has been some of the most discouraging. 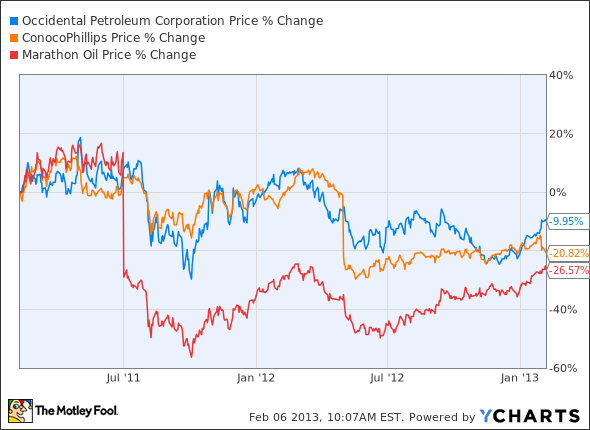 This chart needs to be put in context, though. In the past two years, both Marathon Oil Corporation (NYSE:MRO) and ConocoPhillips (NYSE:COP) have spun off their midstream and refining operations. The big shifts in share price for the two companies (July 1, 2001 for Marathon; April 1, 2012 for ConocoPhillips), coincide with the dates of their spinoffs. Not only have these moves allowed the two companies to focus their capital programs on exploration and production, but they have also unlocked lots of shareholder value. 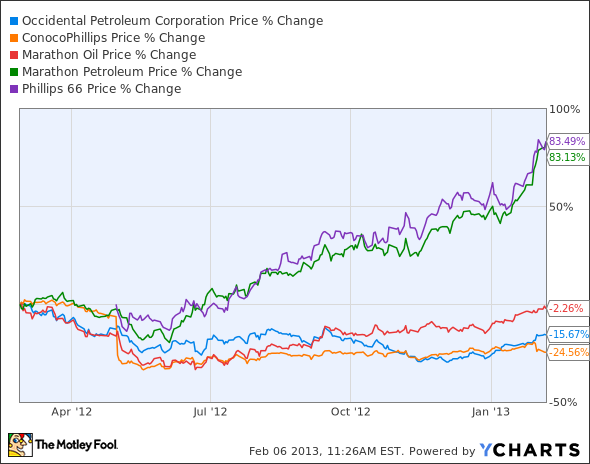 Since Phillips 66 (NYSE:PSX)‘s IPO back in April of last year, both it and Marathon Petroleum Corp (NYSE:MPC) have been two of the best-performing stocks in the market. This is in large part thanks to one of the most advantageous markets for refining in the past decade. With crack spreads for mid-continent refiners reaching as high as $25, some might consider this a golden age of refining.

Just like the parent companies have been able to focus their efforts on their core business, so too have these new spinoffs. In order to maximize crack spreads across all of its refineries in the U.S., Phillips 66 has invested in over 2000 rail cars to deliver cheaper Bakken crude to its East and West Coast refineries. Likewise, Marathon Petroleum has plans also to ship Bakken and Canadian oil sands via pipeline to its facilities as well as develop its capacity in the Ohio region to process natural gas liquids from the Utica formation.

So why won’t Occidental join the spinoff party and see if its refining assets can give investors something to smile about? According to Chazen, its midstream and pipeline assets are too concentrated in the Permian Basin to make a difference for investors. Here is why that makes sense.

Of the 15 oil and gas processing facilities the company operates, 13 of them are located in West Texas and New Mexico, the center of the Permian Basin. The company also owns 2,700 miles of pipeline in the basin and large CO2 source fields for enhanced oil recovery. This represents the bulk of the company’s midstream and refining operations. These assets, plus its other midstream and chemical operations in the U.S. and abroad, only represented 10% of the company’s earnings for the quarter, not including asset imparements. In the case of Phillips 66 and Marathon Petroleum, these two companies have a much more geographically diverse portfolio that allows them to take advantage of price differentials throughout the country. This just simply not possible for Occidental’s assets.