Despite embarrassing sales, Microsoft Corporation (NASDAQ:MSFT) apparently hasn’t given up on the Surface RT.

DIGITIMES is reporting that Microsoft will introduce a second generation of its maligned Surface tablet next month. NVIDIA Corporation (NASDAQ:NVDA) will continue to provide the chips, according to the report, but the screen size will shrink from 10.6 inches to 8 inches.

The screen’s not the only thing shrinking. The price tag of what may as well be the Surface RT Mini will be roughly chopped in half to the $249 to $299 range.

Price was the first of five reasons I singled out in predicting that the Surface RT would fail in October. It never made sense for Microsoft Corporation (NASDAQ:MSFT) to match Apple Inc. (NASDAQ:AAPL)‘s iPad on price when is lacked developer support and the iOS stability and ecosystem.

Magnetically attaching keyboards and a touch-enhanced Windows RT version of Office Home and Student were never going to be enough. 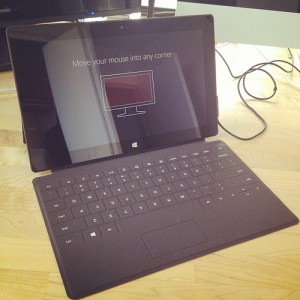 Microsoft Corporation (NASDAQ:MSFT) should’ve been this aggressive on pricing last year, even if it meant upsetting its hardware partners that were putting out their own Windows RT tablets. The Surface RT would’ve made a difference during the holiday shopping season. Now it has to worry about the market perception that Surface RT is doomed.

Industry tracker IDC reports that just 200,000 Surface RT tablets shipped during the first three months of the year. That’s 0.4% of the market. Do you really think developers are going to support that platform unless Microsoft Corporation (NASDAQ:MSFT)’s cutting big checks to subsidize the support?

Microsoft has seen Apple Inc. (NASDAQ:AAPL)’s iPad Mini cannibalize full-sized iPads at a $329 price point. The cruel silver lining for Microsoft here is that there is apparently not much of a Surface RT market to eat into.

However, the Surface RT Mini will still be priced a lot higher than many of the smaller Android tablets. The brand also needs to recover, and that’s a tall order in these tech cynical times.

Microsoft Corporation (NASDAQ:MSFT)’s Surface has problems and they run deep.

The article Can Microsoft Get It Right This Time? originally appeared on Fool.com and is written by Rick Munarriz.