Today there was just one U.S. economic release: the National Association of Realtors existing-home sales, which dropped in March to a seasonally adjusted annual rate of 4.92 million. That’s down 0.6% from February’s 4.95 million and below analyst expectations of a rise to 5.03 million. While down for the month, the level of sales is still 10% above last March’s level of 4.46 million. 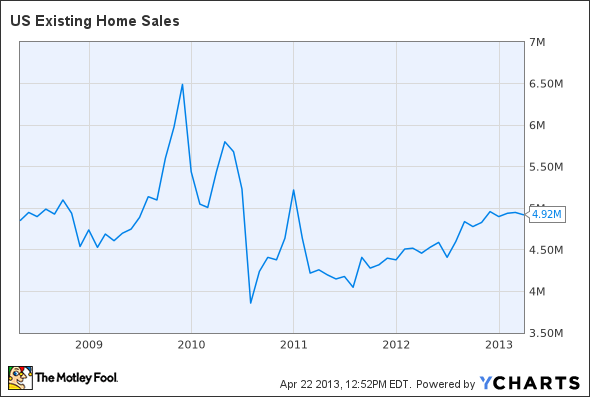 US Existing-Home Sales data by YCharts.

The NAR said sales were lower because of the limited inventory of homes for sale. Total housing inventory increased just 1.6% to 1.93 million existing homes for sale, which translates to a 4.7-month supply. That’s roughly 17% less than it was a year ago, when inventory was at a 6.2-month supply. NAR chief economist Lawrence Yun said: “The inventory improvement last month results from a seasonal gain, but conditions continue to broadly favor sellers. We need a housing supply of over 6 months to have a generally balanced market between home buyers and sellers, but it’s unlikely we’ll get there without greater increases in housing construction.” The rising housing market was one of the driving forces of the U.S. economy in 2012; hopefully it will continue to improve.

The second headline is that Microsoft Corporation (NASDAQ:MSFT) will reportedly bring back the “Start” button in its next update to Windows 8, according to The Verge. Windows 8 has been heavily criticized for its massive diversion from previous Windows designs — an effort to provide a single-user experience across desktops, tablets, and smartphones. Consumers have been slow to warm to Windows 8, and market research firm IDC has blamed Windows 8, among other factors, for the past quarter’s 14% drop in PC sales. Bringing back one of Windows’ most recognizable features would be a comforting compromise for many Windows users. Despite slowing PC sales, Microsoft stock has been doing well, having reported better-than-expected earnings last Thursday.