Over $2 trillion is spent each year on acquisitions, including purchases of entire companies, divisions, or company components. However, study after study puts the failure rate of mergers and acquisitions of all variations between 70%-90%. This month’s TechCrunch report, citing leaked internal documents concerning Microsoft Corporation (NASDAQ:MSFT) possibly dropping $1 billion to take the NOOK e-reader business off Barnes & Noble, Inc. (NYSE:BKS)’s hands, sent Barnes’ stock up 24% in a single day. While there are a few winners when it comes to these types of deals, historically there are far more losers.

Microsoft Corporation (NASDAQ:MSFT) and Barnes & Noble, Inc. (NYSE:BKS) don’t need to be introduced to each other. Microsoft invested $300 million in April 2012 for an approximately 17.6% equity stake in a shared strategic subsidiary related to the e-reader business and the NOOK. It has been said that the deal was a win-win situation for both companies. Barnes & Noble is rumored to be planning a separation from the NOOK business entirely by the end of April 2014, due primarily to un-profitability from low margins, declining revenues, increasing competition, and weak 2012 holiday sales. This would allow Microsoft Corporation (NASDAQ:MSFT) to take full control of an e-reader business which might help to promote its growing app store that is approaching 100,000 titles.

April 28, 2010 is probably a date that the Hewlett-Packard Company (NYSE:HPQ) wishes it could take back. That is the date that HP announced to the world they were buying Palm, Inc. for an enterprise value of $1.2 billion. Since that date, HP stock has dropped over 60% (not including dividends), the Palm brand was replaced a year after being acquired, and HP eventually discontinued all webOS devices (including smartphones and tablets) to leave anything resembling of Palm extinct to customers. While acquiring Palm wasn’t the sole reason for HP’s decline since that date, it does represent some of the poor management decisions made in recent years as the world transitions from PCs to tablets and mobile platforms. Overall, HP’s lack of understanding of Palm’s products from the ground floor up and an inability to fit them into the Hewlett-Packard Company (NYSE:HPQ) company culture or add anything to the designs as far as originality goes (causing the tablets to be referred to as iPad clones, for example) led this acquisition to never reach its true potential. 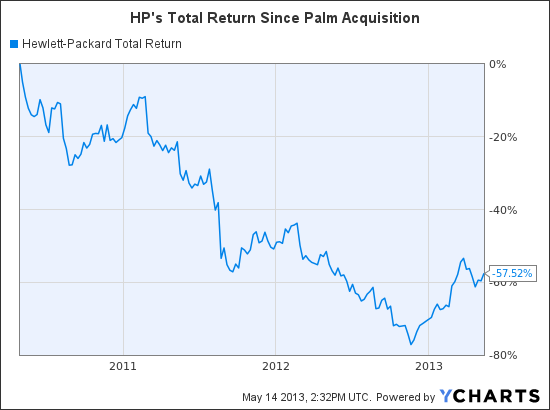 In 2005, Sprint Nextel Corporation (NYSE:S) acquired Nextel Communication for a majority stake in a $35 billion stock purchase. Technological differences and business culture incompatibilities led to this failure and the end of the Nextel network. One of the main goals of this merger was to have access to each other’s customer bases and eventually cross-market products. Instead what happened was that Sprint as a company fell further behind AT&T Inc. (NYSE:T) and Verizon Communications Inc. (NYSE:VZ), while the millions of ex-Nextel customers left Sprint entirely. Company culture differences and opposing business philosophies prevented Sprint from utilizing the technology behind Nextel’s products properly and was one of the reasons why this merger failed and a $30 billion company write-off in 2008 resulted.

Unlike the Sprint-Nextel merger where the combined company tried to cross-market products, Dell Inc. (NASDAQ:DELL)’s 2006 acquisition of Alienware had the opposite goal – preventing cross-marketing entirely. By keeping Alienware products on their own website and not advertising the subsidiary on its own website, Dell believed that this would be the best move in the long-run. Instead, Dell underestimated the fact that Alienware PCs throughout their history were aimed at the hardcore PC enthusiast and featured system prices in the $2,000-$5,000+ range. Dell had been known as the PC for the average or beginning PC user and had always sold PCs for far less. Because of the Dell association, the Alienware brand was no longer seen as true Alienware by dedicated customers and many moved on to competitors in the high-end PC sector like Falcon Northwest.

But Google Inc (NASDAQ:GOOG) has acquired lots of companies

While it is true that Google has largely been successful as both a company and a stock since its beginning and successfully acquired YouTube in 2006 for $1.65 billion in stock, over 1/3 of its acquisitions have been failures. Since 2003, Google has in fact undertaken over 120 mergers and acquisitions. Some good examples of failure include the social gaming company Slide (purchased for $228 million in 2010 and shut down the following year) and Aardvark (which suffered a similar fate to Slide). The biggest reason that most acquisitions by Google Inc (NASDAQ:GOOG) fail mirror the main reason why other companies discussed so far fail – the inability to understand and take advantage of the business or technology properly within the current company’s business model. Basically, the purchasing companies do not typically have the foundation necessary to take full advantage of a newly-acquired company and make its products function in the way that they were originally intended.

There’s no such thing as a halfway Nook

Microsoft Corporation (NASDAQ:MSFT) buying the NOOK e-reader business from Barnes & Noble, Inc. (NYSE:BKS) and expecting the best is going against the odds. Historically, companies are rarely able to run a business or product line better than the original creators. It is anyone’s guess as to what the end result will be for Barnes & Noble, the NOOK, and its users. While it might produce great short-term gains for current Barnes & Noble shareholders, it may also be negative for the company in other areas for the long-term. Product support may decline for current users and the entire line may phase out sooner rather than later. Yes, $1 billion is a lot of money to the majority of companies, but in the larger scope of the Microsoft business the NOOK is a lot closer to its actual definition – a small corner or recess in a large space or area.

Microsoft Corporation (NASDAQ:MSFT) will go on just fine with or without the NOOK, despite its goal of completing the Windows Store by adding e-books. In the company’s most recent earnings report, Microsoft showed an 18% increase in revenue and a 19% increase in operating income. In fact, all of Microsoft’s divisions for the three-month period that ended on Mar. 31, 2013 are seeing higher revenues than they were in that same time period a year ago. Despite this, Microsoft isn’t immune to the acquisition curse. Microsoft’s last staked investment that was similar in dollar value and significance was in July 2000 on Telewest Communications, offering $2.3 billion or 23% of the company. Microsoft sought out Telewest to gain a stake in the high-speed communications market, but sold their stake to IDT for only $5 million less than 3 years later.