Despite a release that existing-home sales rose 6.5% to a three-year high, 25 of 30 Dow stocks are in the red. Stocks have been battered around this earnings season. Housing and sales of durable consumer goods (goods lasting longer than three years, such as cars and appliances) have been strong, while sales of nondurable consumer goods have grown more slowly. This is evident in the stronger-than-expected quarterly reports from Home Depot and Lowe’s. It can also be seen, conversely, in the weaker-than-expected quarterly reports from the likes of Target and Wal-Mart.

The big event today, the release of the FOMC’s minutes from the July meeting, comes at 2 p.m. EDT. Investors hope to gain deeper insight into the committee’s thoughts as to what metrics it is examining and when the Fed might begin to draw down its monthly asset-purchase program, known as “quantitative easing.” Earlier this summer, the Fed spooked the markets, particularly the bond market, when it said that if the economy continues to improve, the Fed could begin to cut back QE as soon as the end of 2013. While the stock market has not been hit too hard by the rising worries over Fed “tapering,” the bond market has suffered a major sell-off, with the yield on the 10-year Treasury rising by more than 50%. 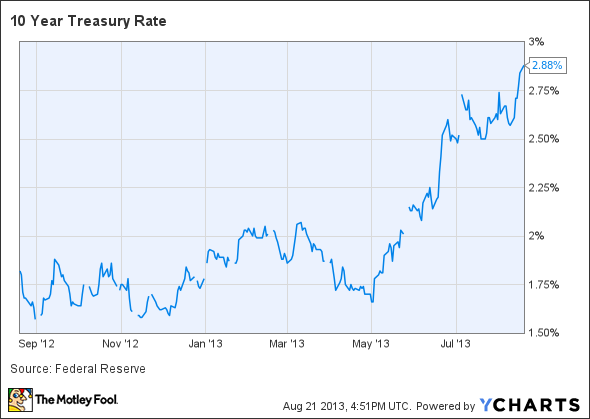 So what’s an investor to do in this Fed-dominated market? Your time is better spent ignoring the market’s ups and downs and focusing on your investing plan — or making an investing plan if you don’t have one. If the market drop continues, opportunities will arise for long-term investors to pick up undervalued companies.

The article Microsoft Stock Defyies the Dow’s Drop originally appeared on Fool.com and is written by Dan Dzombak.